Arkansas PBS reserves the right to flag and edit any program that has sensitive content. The flag categories are "sex," violence," and "language." There is an additional distinction between real and dramatic violence. Examples of flags include, but are not limited to, sexual situations, dramatic/real dead bodies, and offensive language.

Arkansas PBS may distribute the program in its entirety, including any and all titles and credits, at its discretion, or preempt its scheduled release for any reason.

The producer grants "Arkansas PBS Student Selects" the non-exclusive rights to reproduce any part of the film and to exhibit the film by any medium for the purposes of broadcast/screening or its promotion. This includes its online distribution through the Arkansas PBS website and/or a third party, such as YouTube.

In addition the producer guarantees that he/she has obtained all the necessary permissions and clearances to enter this film and that the film and all of its elements and/or screening of the film does not infringe on the copyrights of any third party. Any claims made by any person or entity against the film, actors, crew, locations, or any other party are entirely the responsibility of the producer. The producer also assures guidelines specified on this page. 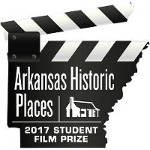 A prize will also be provided by Preserve Arkansas for winning films focusing on properties currently on the Most Endangered Places list.

The Thea Foundation is designed to help kids find confidence, self-worth and perspective through creative expression. A $2,500 scholarships is available for each of the following categories: Screenwriting, Directing, Cinematography, and Editing. Scholarships will be awarded to the student's institution of choice, regardless of planned major, GPA or test scores. Visit TheaFoundation.org for complete rules and to submit your film for a Thea Scholarship.