"James and the Giant Peach" by Roald Dahl 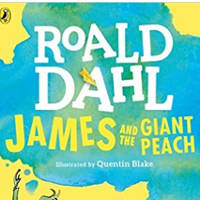 After James Henry Trotter's parents are tragically eaten by a rhinoceros, he goes to live with his two horrible aunts, Spiker and Sponge. Life there is no fun, until James accidentally drops some magic crystals by the old peach tree, and strange things start to happen. The peach at the top of the tree begins to grow, and before long it's as big as a house. Inside, James meets a bunch of oversized friends − Grasshopper, Centipede, Ladybug and more. With a snip of the stem, the peach starts rolling away, and the great adventure begins! 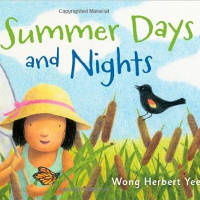 On a hot summer day, a little girl finds ways to entertain herself and stay cool. She catches a butterfly, sips lemonade, jumps in a pool and goes on a picnic. At night, she sees an owl in a tree and a frog in a pond and hears leaves rustling. Before long, she's fast asleep, dreaming about more summer days and summer nights. 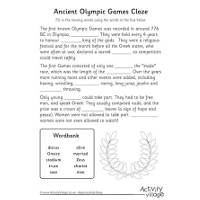 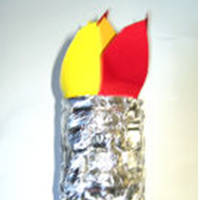 Cut the bottom from the drink bottle, and discard. You may need to smooth the edges for young children. Wrap the bottle in aluminum foil, and tape down any loose edges. You now have your torch.

To make the flame, cut flame shaped pieces from the paper, and tape to the inside of the torch starting with small pieces at the edge and getting bigger as you work in. 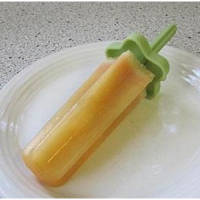 Prep: Chop peaches in a food processor. Transfer 1 cup (keep the peaches somewhat chunky) to a medium bowl. Add the lemon juice, orange juice and sugar to the food processor. Puree until smooth. Add to the bowl with the peaches, then stir in vanilla.

Divide the mixture among 12 2-oz or eight 3-oz freezer-pop molds (or small paper cups). Freeze until beginning to set (about 1 hour). Insert frozen treat sticks into molds, and freeze until completely firm (one hour more). 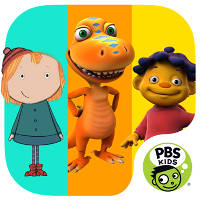 In PBS KIDS Measure Up!, children ages 3 to 5 join PBS KIDS characters on an adventure through Treetop City, Magma Peak and Crystal Caves practicing early math concepts focused on length, width, capacity and weight with their friends from "Dinosaur Train," "Peg + Cat" and "Sid the Science Kid." Children can also collect rewards and unlock digital toys as they play.

We have TIGERTASTIC news to share about "Daniel Tiger's Neighborhood"!

Daniel Tiger goes back to school beginning Sept. 5. It's a busy first week of school for Daniel − he can't find his red sweater, his teacher gets a new hairdo, he learns to share with his sister, makes his own version of the Neighborhood, develops allergies, and then ends this jam-packed week with a field trip. Whew!

Save the date for AETN Family Day!

Join AETN as we celebrate our 50th anniversary at AETN Family Day 2016: Peace, Love & AETN Saturday, Sept. 24, from 10 a.m. to 4 p.m. Travel back in time to the 1960s when AETN first went on the air. Watch classic episodes of programs from the AETN Video Vault, meet your favorite PBS KIDS characters and get a sneak peak of what to expect next from AETN and PBS. We'll have games, face painting, arts and crafts, story time, snacks and much more − all free and open to the public. Stay tuned to aetn.org/family day for updates and a full schedule of events.

Play, watch and learn with your favorite series at pbskids.org. Check out activities and resources, and follow our blog, at aetn.org/parents. For educational resources at home and in the classroom, including a downloadable resource guide, visit…