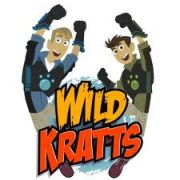 Kangaroos, Dracos (flying lizards) and other critters join brothers Chris and Martin Kratt every weekday on Wild Kratts to teach our little ones about science in such a fun, cool way.  This mama has learned a few things too  its easy to get sucked in to this show  sort of like a Globetrekker with animals and fun facts.  Or a Rick Steves Europe, just animated with a few creatures thrown in for fun.  Makes me want to travel.  Makes my kids excited about science.  Win, win.  And no, well stick to turtles and fish for now  maybe the elephant when you are a little older.

Check out a special week of shows the first week of April:
Backyard Adventures Week premieres on AETN April 2-6 at 4 p.m.:
April 2: Mystery of the Squirmy Wormy
April 3: Voyage of the Butterflier XT
April 4: Bass Class
April 5: The Blue and the Gray
April 6: Flight of the Pollinators  NEW!
About the show:
Animals can take you anywhere in science! Creature teachers Chris and Martin Kratt will take 6- to 8-year olds and their families along on extraordinary animal-powered adventures in WILD KRATTS. The show transforms the Kratt Brothers, creators of the award-winning Kratts Creatures and Emmy-winning Zoboomafoo, into animated versions of themselves, allowing the real-life zoologists to visit wild animals in their little-seen habitats and showcase key science concepts along the way.

From elephants using physics to suck gallons of water with their trunks to a fleet of peregrine falcons that harness the force of gravity to speed through the air, each of the 40 half-hour episodes of WILD KRATTS presents age-appropriate science inspired by the natural abilities of the animals that the Kratt brothers  and young viewers  meet.