Arkansas PBS > Engage > Blog > What do you do after "Downton"? Watch "Mr. Selfridge"! 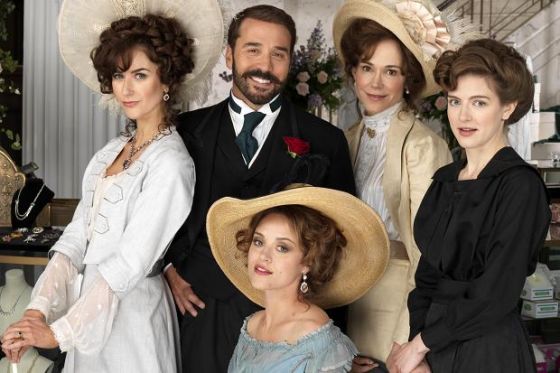 If you're a "Masterpiece Theater" fan like me, you may be in a bit of a slump right now. We did, after all, just end the season of "Downton Abbey" on that note - even if it was a season that earned high points for drama. Worse, we have to wait an entire year for "Sherlock" to return. (It is at least, thank the benevolent BBC gods, returning!) Not to fear, though. "Mr. Selfridge" (along with a the new season of "Call the Midwife") will be here starting March 31.

So what exactly will "Mr. Selfridge" have in store for us? Lovers of lavish period dramas, get ready! We'll enter the world of London's opulent department store, sprung from the genius of the eponymous Chicago native who introduced Londoners to elaborate window displays, cosmetics counters and a wealth of other marketing breakthroughs.
The epitome of the self-made man, Harry Gordon Selfridge, Sr., left school and began working at the age of 14. The retail magnate eventually joined Marshall Field as a stock boy and, over the course of 25 years, worked his way up the company ladder to become a partner. Combining guile, taste, boldness, the poise of a swindler and the charm of a Casanova, Harry Selfridge was a lively, reckless spirit that gave birth to extreme success … and trouble.
With such material to work with, the geniuses at "Masterpiece" can only build a wonderful story. The eight-part series takes us through the real-life story of the flamboyant and visionary American founder, portrayed by Jeremy Piven of "Entourage" fame, and introduces us to an incredible cast of his family, friends, celebrities and associates. (I'm of the opinion that, if you don't love the up-and-coming shop girl, Agnes, you don't have a heart!)