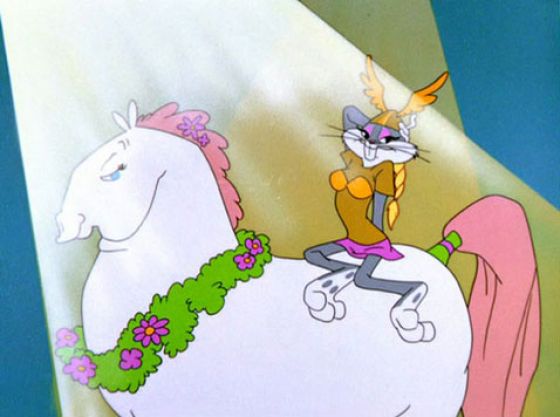 This week, Great Performances at the Met presents Robert Lepages acclaimed new production of Wagners "Der Ring des Nibelungen," or "The Ring Cycle," a series opera lovers will surely appreciate. But what if you arent convinced that opera is your cup of tea? From one skeptic to another, let me reassure you. If youre a fan Tolkiens fantastic hobbit journeys and you enjoyed watching wascally wabbits on Saturday mornings, The Ring Cycle is for you. Youre at least already familiar with the music!

Is that a bit of an oversimplification? Maybe. Okay (opera aficionados), probably. But I think we can all admit that, for better or worse, a certain stereotype about opera exists, and, if allowed to, that stereotype can intimidate us and limit our appreciate of an amazing series.
So lets talk about what opera is. We know nothing is over until the proverbial fat lady sings. And we know that operas highbrow, for the highly educated (aka snooty) crowd. We stereotypically think of operas as historical, in one sense or another, and realize that theyre generally sung in a foreign language.
Unless you speak Italian fluently (and in the case of The Ring, German, as well) and are comfortable in the circles of the intelligentsia, opera can be a bit intimidating. But the fact of the matter is that, like other formidable classics  Shakespeare, Dickens, the theater at large, classical music in general and what-have-you  opera began as a part of pop culture. Its stars were referred to only by their last names; screaming fans swarmed the performers in public; and operas divas gave the word a new definition  the one the majority of us use most frequently today. And, really, though weve set opera upon a pedestal, its still quite present in our lives today.
Exhibit A? Bugs Bunny.

Now, Whats Opera Doc?  though voted the best animated clip of all time by animation professionals in 1994  is obviously not an complete approximation of Wagners opus. But its a start, and proof that, on some level, we all probably not only know Wagners work, but also enjoy it. However, What, you say, if we only like the plot involving Bugs, and we couldnt enjoy whats happening if the music doesnt document a helmeted Elmer chasing a wabbit?

Exhibit B. The Lord of the Rings.
Again, not an exact replica. But if you Tolkienites enjoyed the series general plot, you might enjoy a bit of a musical variation. A cursed golden ring and treasure, guarded by a dragon, power struggles between good and evil for the rings control, love and deception, plenty of magic and a fiery end? The Ring Cycle has it.
Still not convinced? Well, I suppose theres not much I can do for you, but I know that Ill be watching. In addition to catching a preview, I cheated and got the plotlines in brief, and after a considered review, Im in.

Monday night's "Wagner's Dream" provides a primer for the production's history and gets you acquainted with the composer himself.

Then, Tuesday through Friday, you can experience Wagners Ring Cycle in full. Ill be posting spoiler breakdowns  strictly from the book of me  every afternoon in preparation for the evening. Check back on the Engage blog for your entertainment, and give us your critiques in the comment section!

*Spoiler alert.* Follow this link for an immediate, much more … reverent … outline of The Ring Cycle. Itll quickly bring you up to speed for tonights presentation of Wagners Dream.