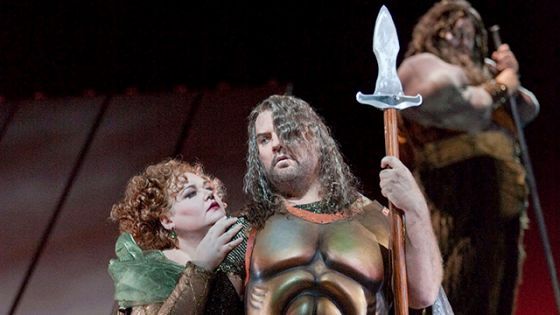 So yesterday, I realized I might be more prepared for opera than I realized and promised to (informally) review the upcoming operas each day.

Consider this your spoiler notice, and be prepared for ineloquence!

Tonight we kick off the first of four operas within Der Ring des Nibelungen with Das Rheingold. The storys really pretty fun. After my Looney Tunes introduction to Wagner, I see Alberich as Elmer Fudd, so Im set from the beginning. And as a fan of The Hobbit, this piece has a certain appeal for me. But less talk, more description, right?

Time to get down to the brass tacks:

Set in mythical times, Das Rheingold opens as the lovely singing, swimming Rhinemaidens attract the attention of an ugly dwarf who clumsily tries and fails to capture them. In the process, they tell the spurned little man about a golden treasure of immeasurable worth that will give its owner power of the entire world  but at a great price. Tired of his fruitless attempts, the dwarf renounces love to pursue the treasure.

Meanwhile, in the realm of the gods, Wotan  head honcho  is in for it. In exchange for the giants construction work on his new castle, he promised to give them his wifes sister to cover costs. Wifey isnt happy. So, when the giants come to collect, the heavenly gang holds them off long enough to offer the Rhinegold in exchange. The giants agree, but take the sister-in-law with them as a hostage, which creates another issue. Losing the goddess of youth begins to deprive the gods of their youthful luster.

Trekking off for the ransom money, the gods venture below the earth in pursuit of the dwarf and all of the treasure (including the ring) hes accumulated. There, we see our original dwarf has let the power go to his head. In addition to piling up the gold, hes also forced his timid brother to give him a magic helmet that allows him to assume any form and travel anywhere instantaneously. After acquiring the helmet, there was nothing to stop the mean-natured little guy from become a dwarfian dictator and mercilessly enslaving the other dwarves.

Fortunately for the gods, though diabolical, the dwarf isnt particularly smart. After turning himself into a toad to prove his abilities, the dwarf dictator is robbed of his helmet, tied up, and forced to command his fellow dwarves to transport the treasure for the youth goddess ransom. Finally, the gods demand the ring, but the dwarf refuses. Overcome by a lust for power, Wotan wrests it away, crushing the tiny dictators morale and prompting him to curse the ring and its future possessors. The ring will inflict ceaseless worry and death on all of its owners.

Soon, an exchange is made. At the last moment, and prodding of another goddess, the king of the gods gives up the ring, in addition to all of the other treasure, for the return of the youth goddess. Immediately, the curse claims its first victim as one giant kills the other in fight to possess the ring, to the gods horror, foreshadowing the darkness to come.

Now what? You wait for more delightful entertainment until tomorrow! In the meantime, feel free to entertain me. What did you think of tonights opera? (We can compare notes in the morning.)