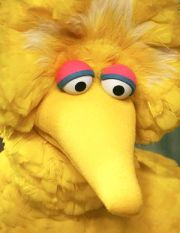 In the last week, youve probably heard a lot of buzz about Big Bird and the threats public television faces. But have you learned why his home on AETN and PBS is so important to Big Birds success? Sesame Workshop posted this blog entry  with heart-felt reasons and cold, hard facts  to explain why our favorite yellow-feathered friend needs his current home.

The following blog post was created by Sherrie Westin and posted to the Sesame Workshop blog on Oct. 8, 2012:

A few days before the first Presidential debate, I talked with CNNs Soledad OBrian about Sesame, not knowing that with all the issues we face in this country, the Presidential election would come down to a referendum on Big Bird!  But that is what Governor Romney made it when he said he liked Big Bird, but would cut PBS funding.

I had tried to explain that Sesame Workshop as an independent, non-profit organization cannot just depend on PBS for funding, and that most of our revenues come from private contributions and from licensing fees from our characters.

But thats only half the story.  Sesame Workshop has created a financially sustainable model to fund production of our educational programming here and around the world.  But Sesame Street would not exist were it not for PBS and its local stations, which is the distribution system for Big Bird and friends to reach all children across the United States, particularly the low income children who need us most.

There have been over 80 million graduates of Sesame Street in the U.S. since 1969, and longitudinal studies have shown that children who grew up watching Sesame Street had 16% higher grade point averages throughout high school!

A CNN poll said 7% of the American public think that PBS gets as much as half the US budget! 30% think its 5%. In reality its 0.014%. Lets keep that in perspective, and also not forget the return on that investment: millions of children who have benefited from early childhood education brought to them by the letters, P. B. S.!