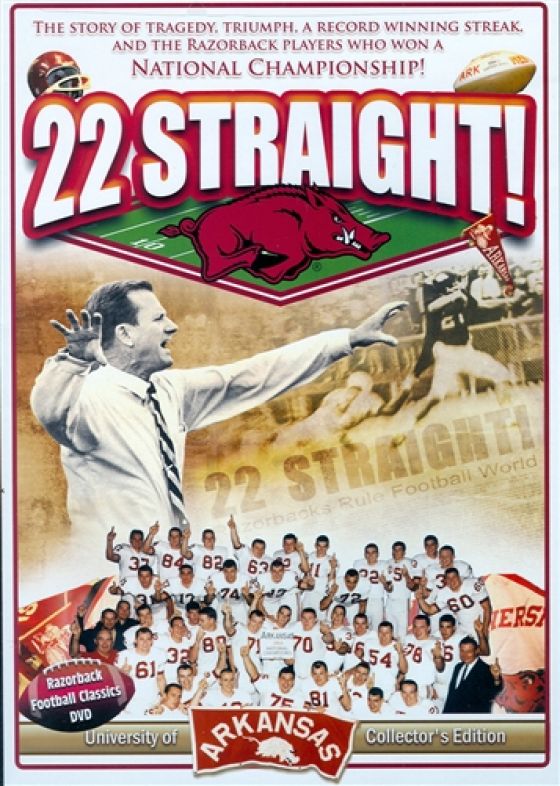 Let's just go ahead and say it. It's a tough year for the hog nation. It can simultaneously be hard to look at the screen … and to look away. But we all still love the Razorbacks, the good years and bad. What's a better salve for our wounds than to join AETN for a look at the golden years? We're excited to air "22 Straight!," an in-depth look at Arkansass championship teams from 1963-64, on Thursday, Oct. 4, at 6:30 p.m.

To say the 1960s was a great decade for the Razorbacks would be a bit of an understatement. Just after President Kennedy's assassination, the Hogs started a winning streak that bested those of every other college team in the nation. Narrated by the late Charlie Jones of Fort Smith (a former NBC sports announcer long known as the voice of the Super Bowl and the Olympic games), the film takes us back to relieve the amazing era through rare footage and interviews with Coach Frank Broyles, the outstanding coaching staff, and the legendary players themselves.

While it's been more than 40 years our Hogs won the Grantland Rice Award for being the best team in college football, many of the stories featured in the documentary had never been told before. This outstanding film, dedicated to the '64-65 teams, more than taking us back to the golden years, reminds why we love football to begin with. All of the excitement (and, let's be honest, the wins) are made even sweeter by the special relationships  between players, coaches and fans  that bonded us all together for a lifetime.

Another special treat? Ronnie Caveness, a star of the '64 championship team and a member of both the Arkansas and College Football Halls of Fame, will join us live in the AETN studios during the show for live commentary!