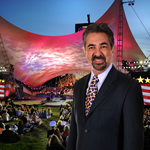 For more than two decades, PBS has been proud to honor the service and sacrifice of our men and women in uniform, their families at home and all those who have given their lives for our country with the NATIONAL MEMORIAL DAY CONCERT. The evening, that has become an American tradition, offers viewers a time to remember, to heal and bring our country together.

The multi award-winning event, broadcast live from the West Lawn of the U.S. Capitol, will be co-hosted for the sixth year by Emmy Award-winner Gary Sinise (CSI:NEW YORK) and Tony Award-winner Joe Mantegna (CRIMINAL MINDS), two acclaimed actors who have dedicated themselves to veterans causes and supporting our troops in active service. Joining co-hosts Sinise and Mantegna will be an all-star line-up of dignitaries, actors and musical artists in performance with the National Symphony Orchestra under the direction of top pops conductor Jack Everly. The U.S Joint Chiefs of Staff will also participate in the event along with the Armed Forces Color Guard and Service Color Teams provided by the Military District of Washington, D.C.

The 22nd annual broadcast of THE NATIONAL MEMORIAL DAY CONCERT will air live in HD before a concert audience of hundreds of thousands, millions more at home, as well as to our troops serving around the world on the American Forces Network.