Despite triple digit temperatures, thousands of people braved the heat and humidity to attend the “Antiques Roadshow” 2015 tour stop in Little Rock on July 25, 2015. My husband, George, and I walked the four block distance from our hotel to the Statehouse Convention Center. We were not familiar with the neighborhood, but knew we had reached our destination when we saw people standing around with large paintings and pieces of furniture. 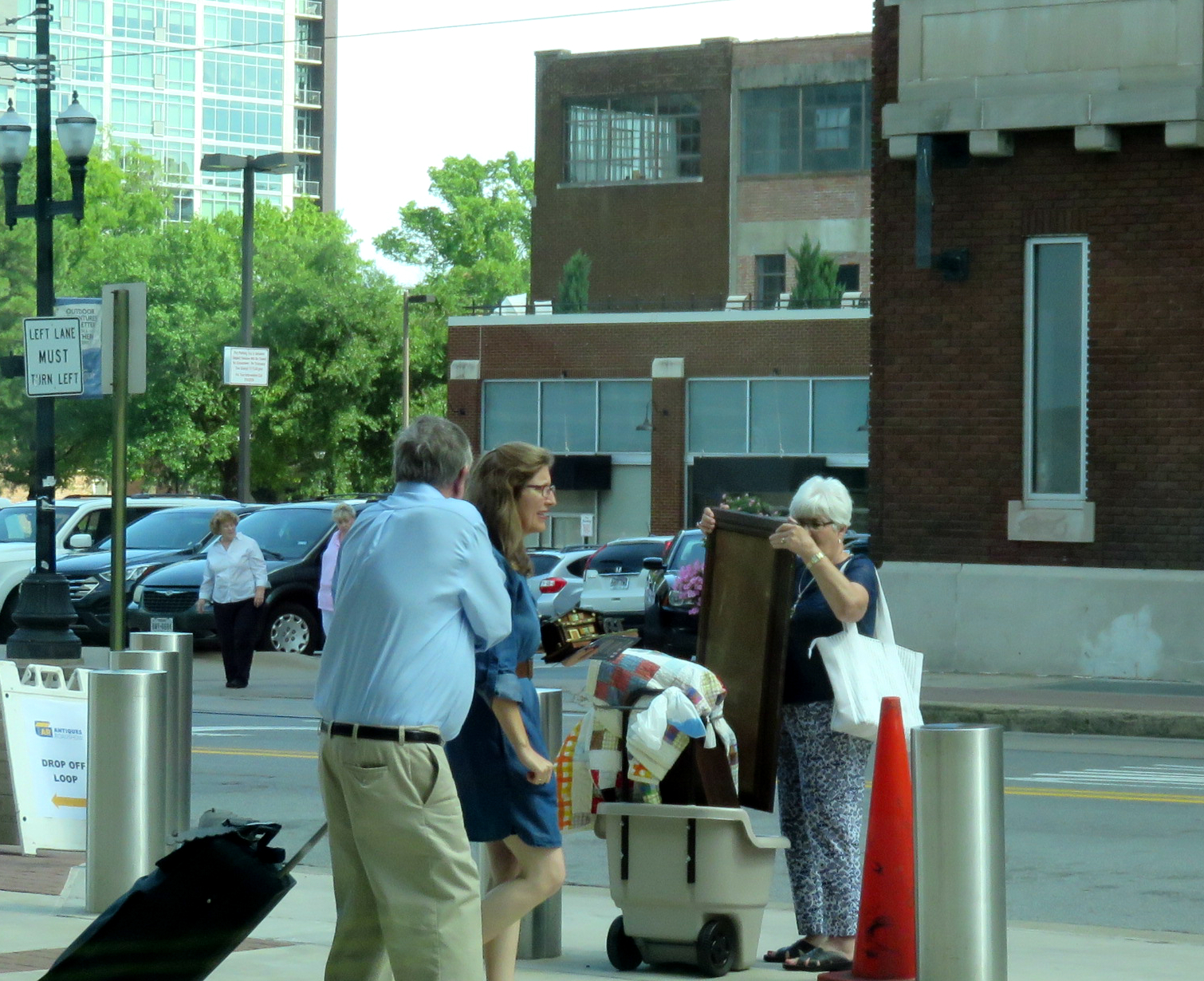 This was our view as we entered the building: 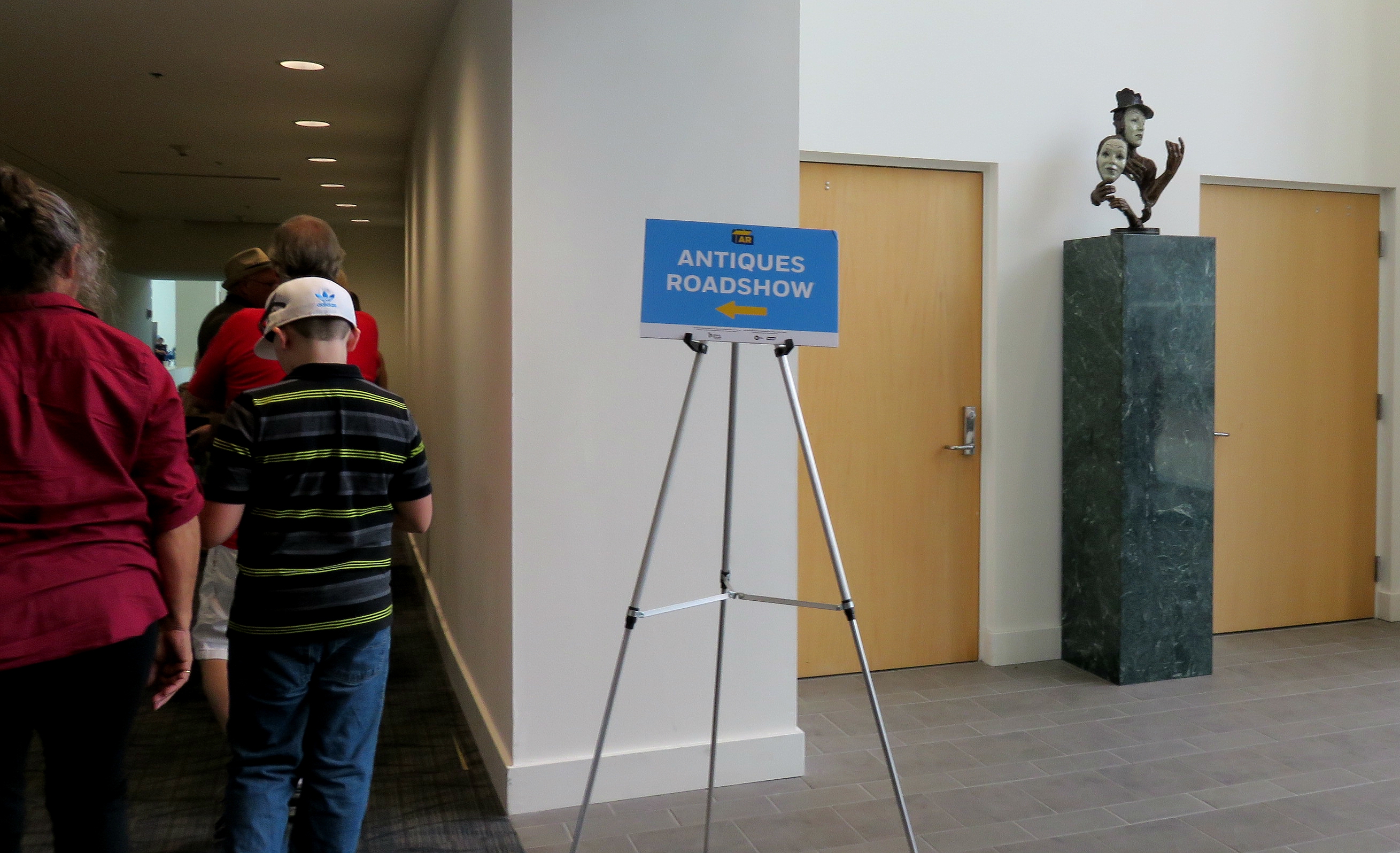 When we first arrived, we were not sure what to do next. People were standing along both sides of a long hallway and they let us know where the line ended. We walked to the end of the line and my first impression was that it was going to take hours to get to the front! I knew that attending the “Antiques Roadshow” meant spending a lot of time in various lines, so I came prepared. 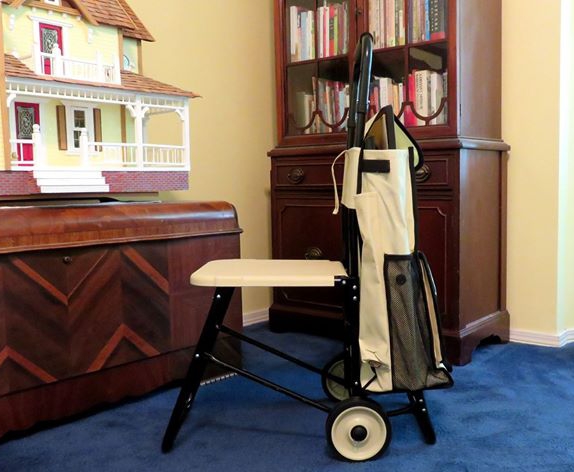 As we progressed through the line, more people talked to me about this carrier/seat than they did about my appraisal items! It was nice to be able to put down the seat when the line was at a slow pace.

When we reached the front of the line in the long hallway, we were directed into a large foyer. We had to wait in a second line, but it went muck quicker. 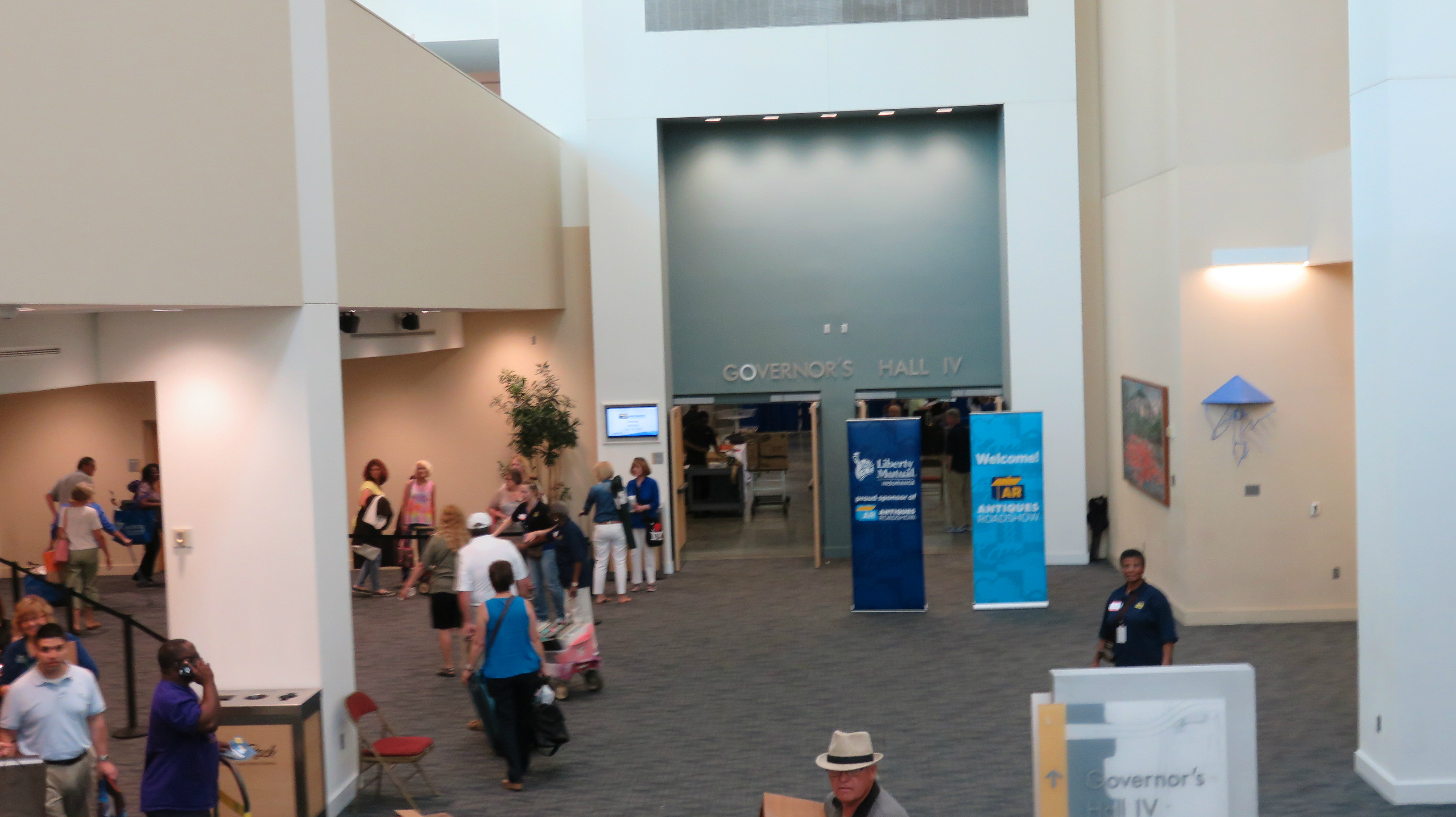 This line was where we presented our tickets and showed the volunteers our items to be appraised. Each ticketholder is allowed to bring two items for appraisal. We were given tickets based on the types of items we had with us. 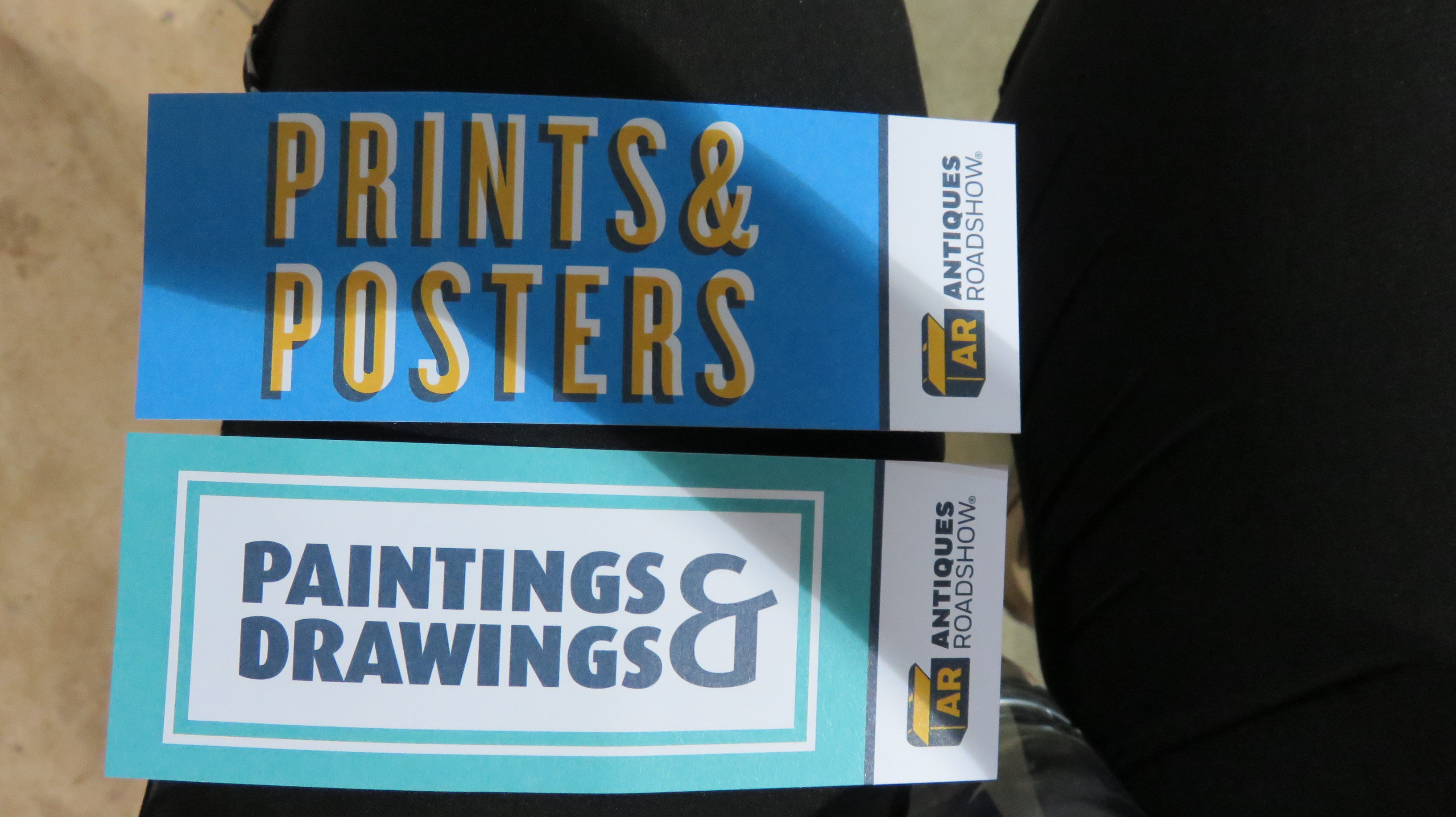 My husband and I spent weeks discussing what we would bring to the show. We chose the following items:

Once we received our item tickets, George and I had to wait in a third line which proved to be the longest one of the day. 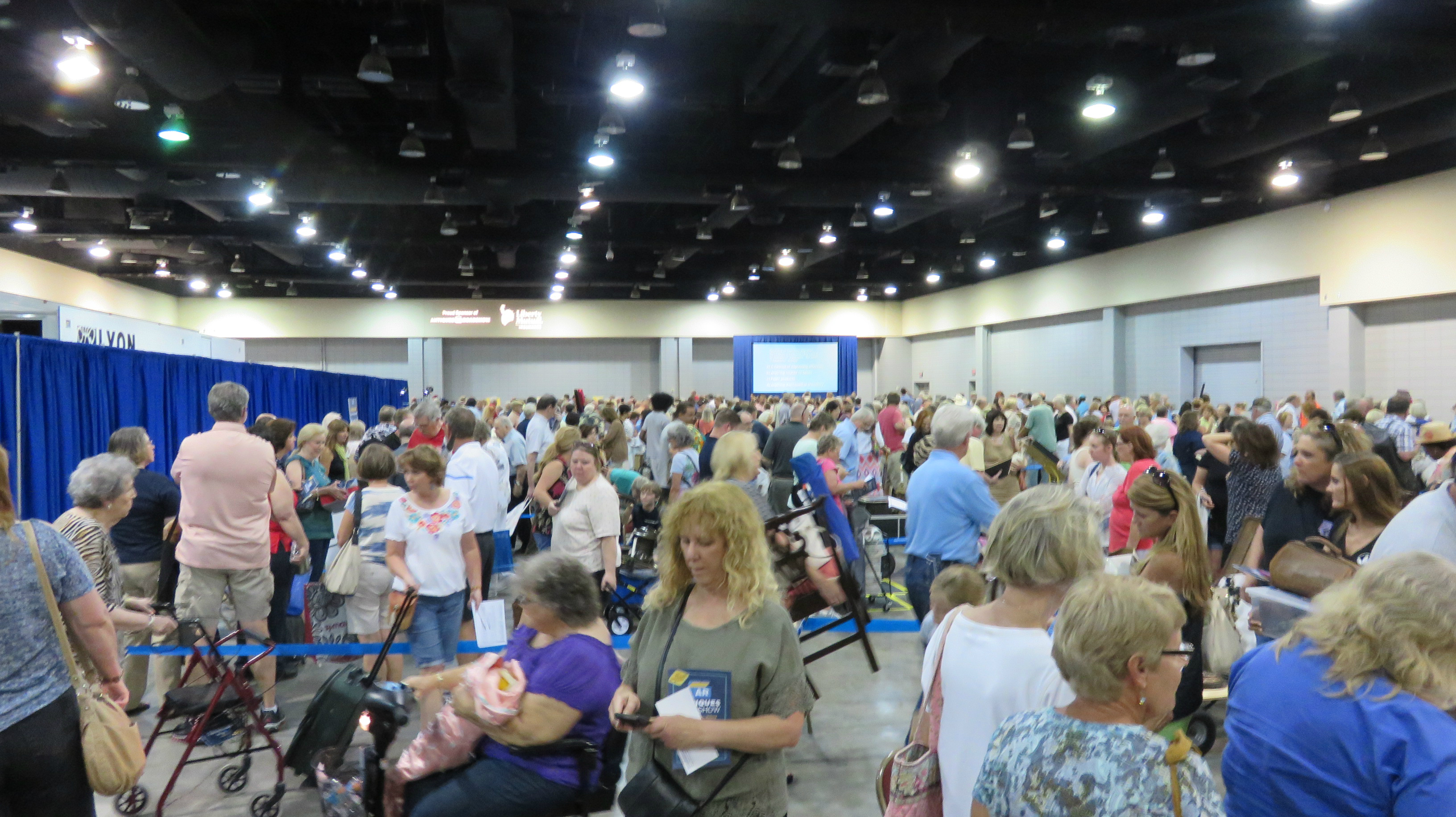 One would think waiting in a long line would be unpleasant. It really wasn’t because people were talking to one another about their items. Since the people standing in line around one another are together for quite a long time, a sense of community develops. Here is a picture of what one of my neighbors-in-line brought to be appraised: 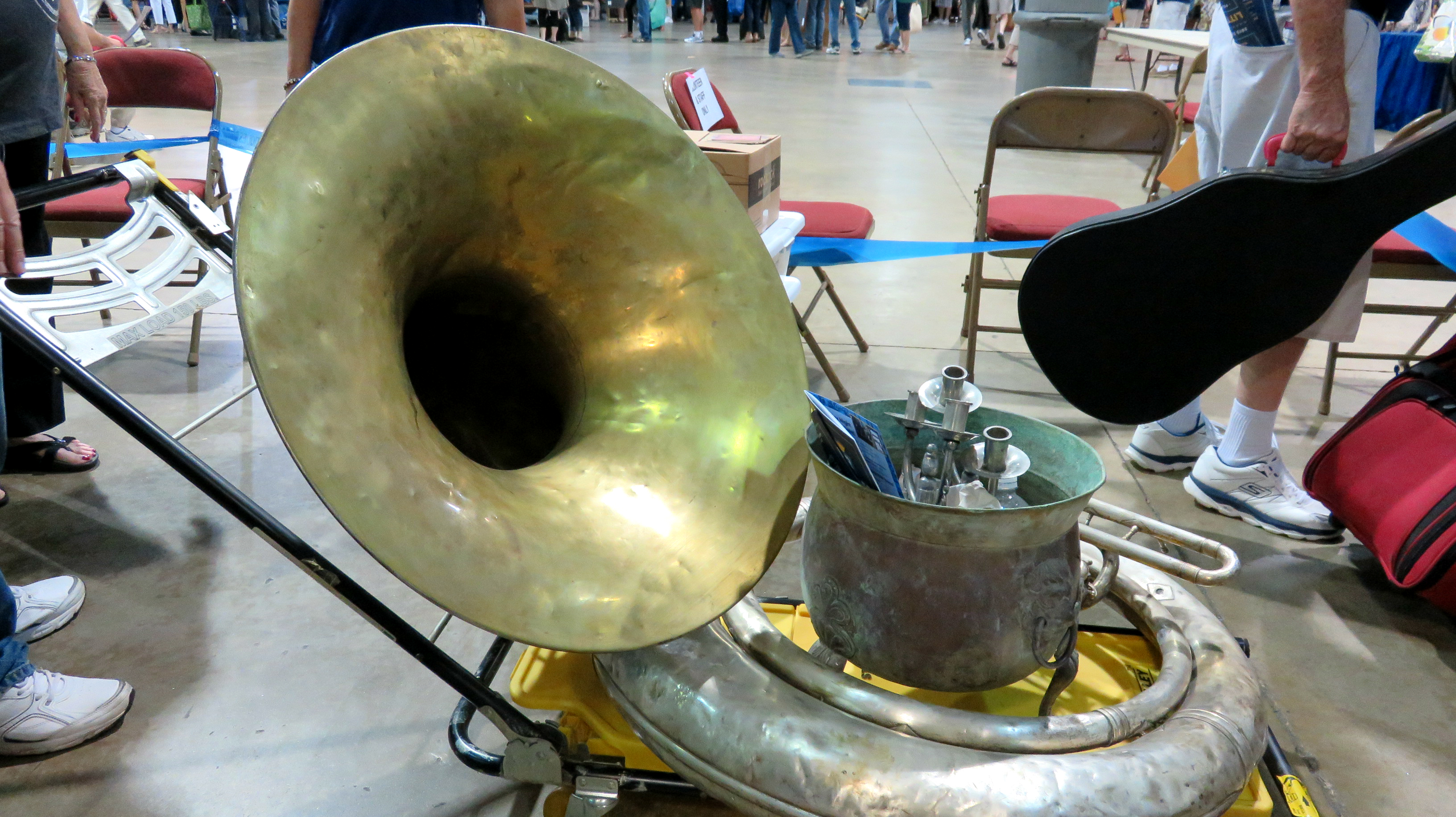 After about two hours, George and I made it to the front of the line. That brought us to a desk where volunteers decided which appraisal line to put us in first. I was sent to the “Paintings and Drawings” line and George was sent to the “Books and Manuscripts” line, so we parted ways. As I waited in the “Paintings and Drawings” line, I saw this beautiful painting on the floor for a long time. After a while, two men finally came over and picked it up. I guess they were leaving it there so they wouldn’t have to keep it with them as they waited in line! 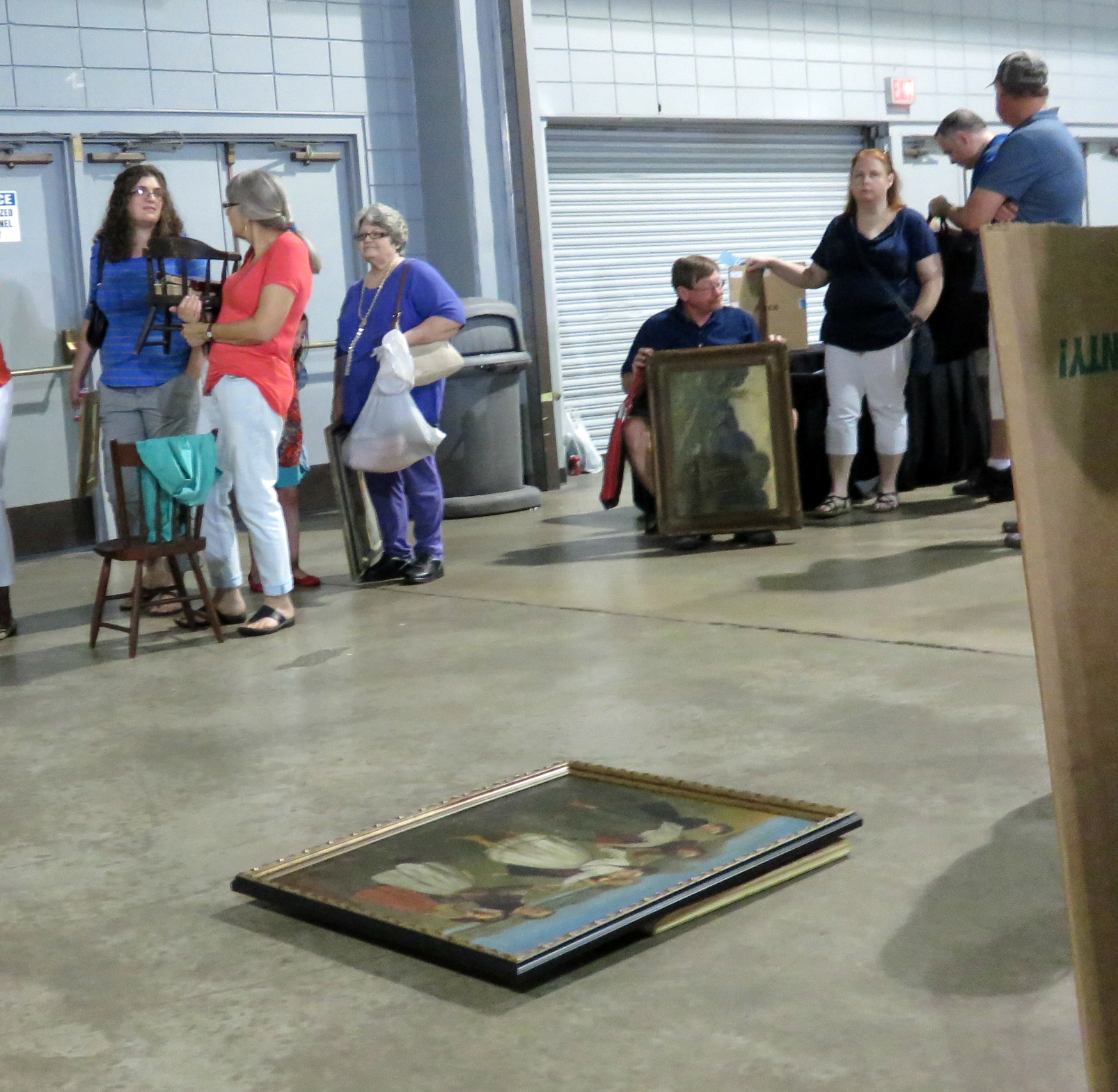 While I stood in line (or sat on my carrier seat), some of the appraisers walked the floor in search of items that piqued their interest. I saw a woman who was having a watch appraised, but it was not happening in the official appraisal area. I wonder if she was sent to the Green Room for a possible on-air appearance! 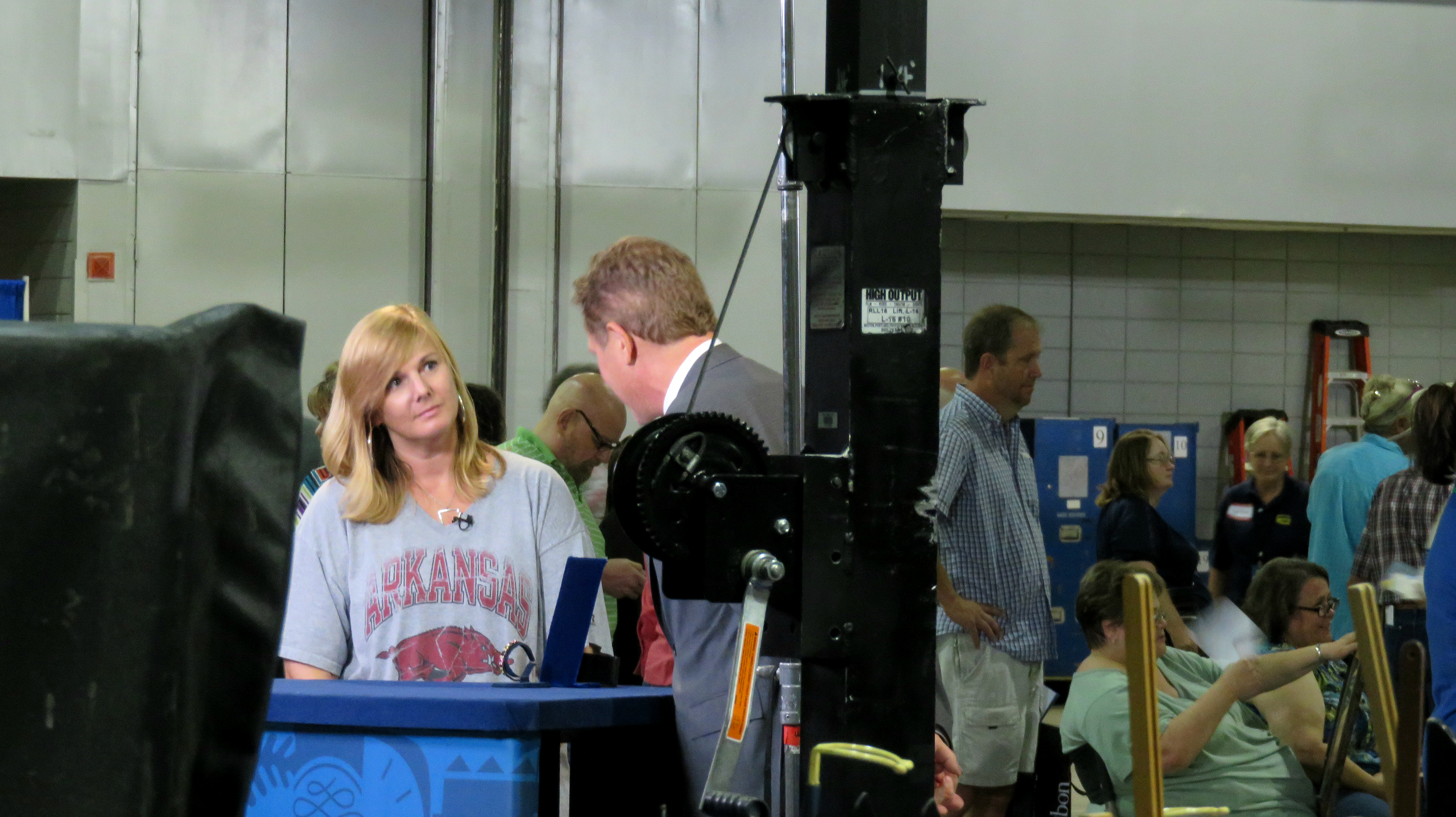 During my wait in line, I also observed Nicholas D. Lowry consulting with a producer about a few vintage posters. The owner of the posters was cautiously optimistic as he watched Mr. Lowry and the producer spend about 10 minutes discussing them. I don’t know whether the owner and his items made it onto the show. 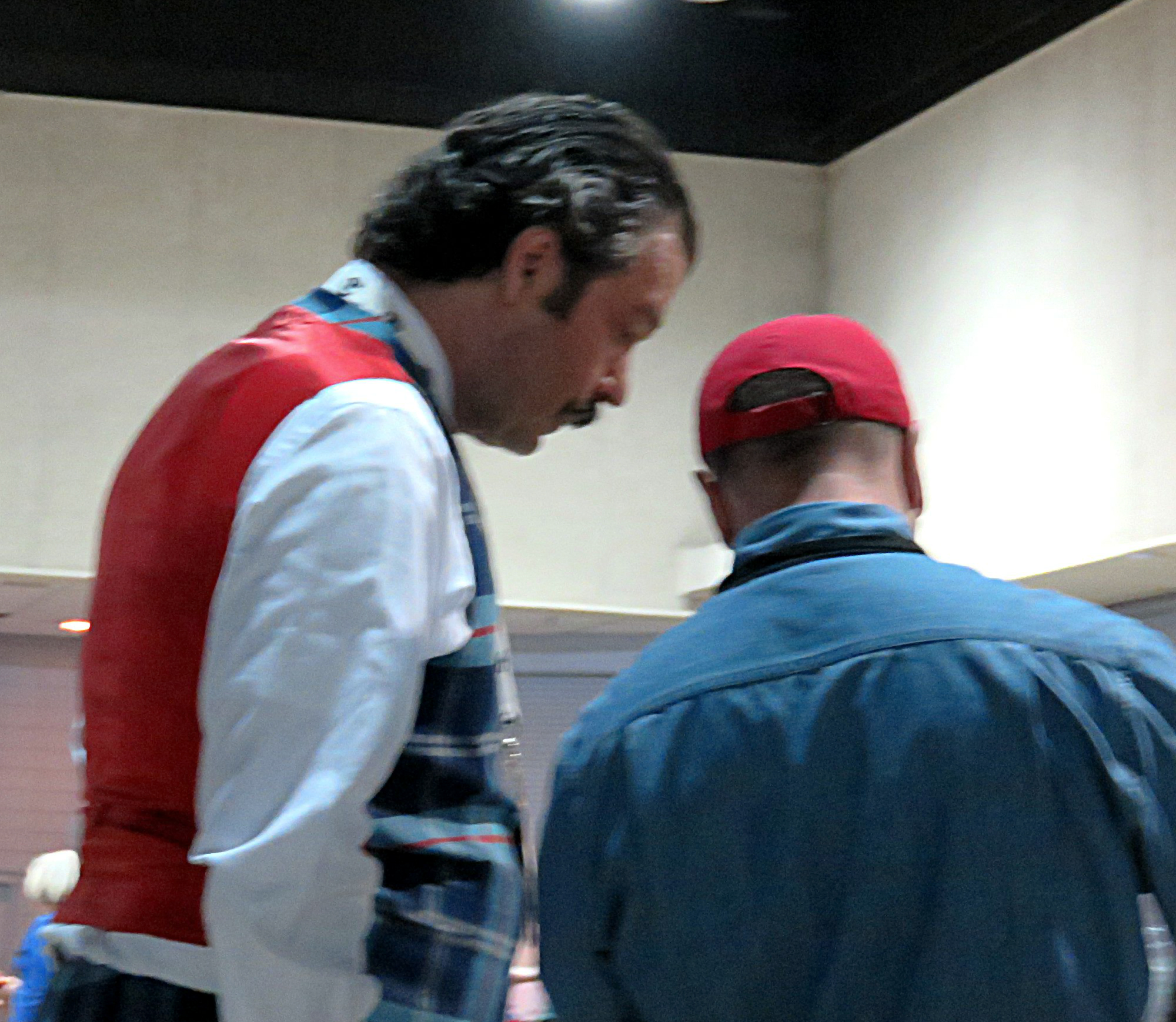 After waiting in three lines (so far), I was excited to finally see the end of the line that would bring me into the official "Antiques Roadshow" area. There were lots of lights, cameras and familiar appraisers in sight. I could even see Leslie and Leigh Keno appraising furniture, though I was not close enough to hear them. 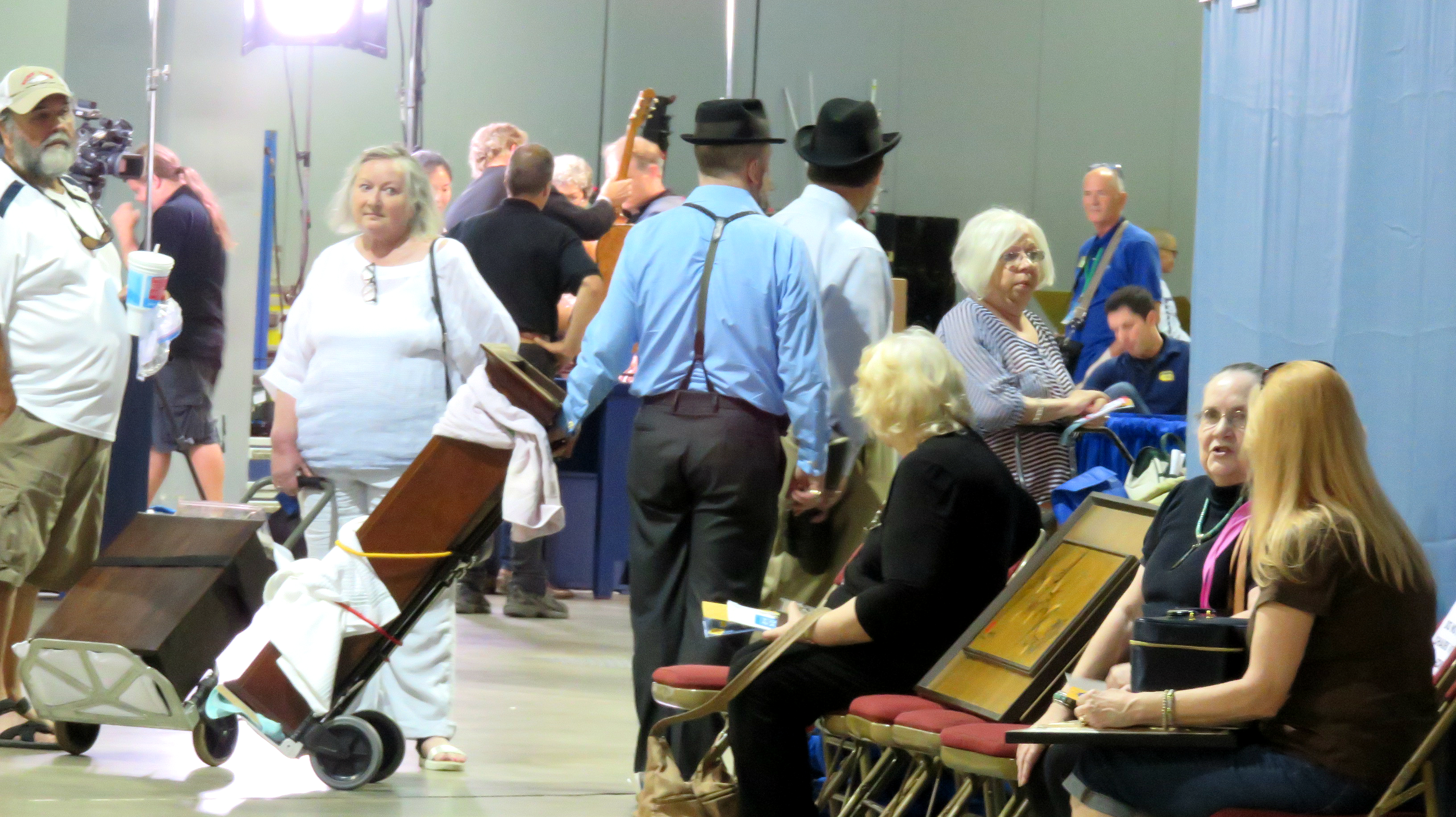 Once I made it to the end of that line, I was admitted into the official area for my first appraisal. There were appraisers sitting at tables with large banners indicating their areas of expertise. 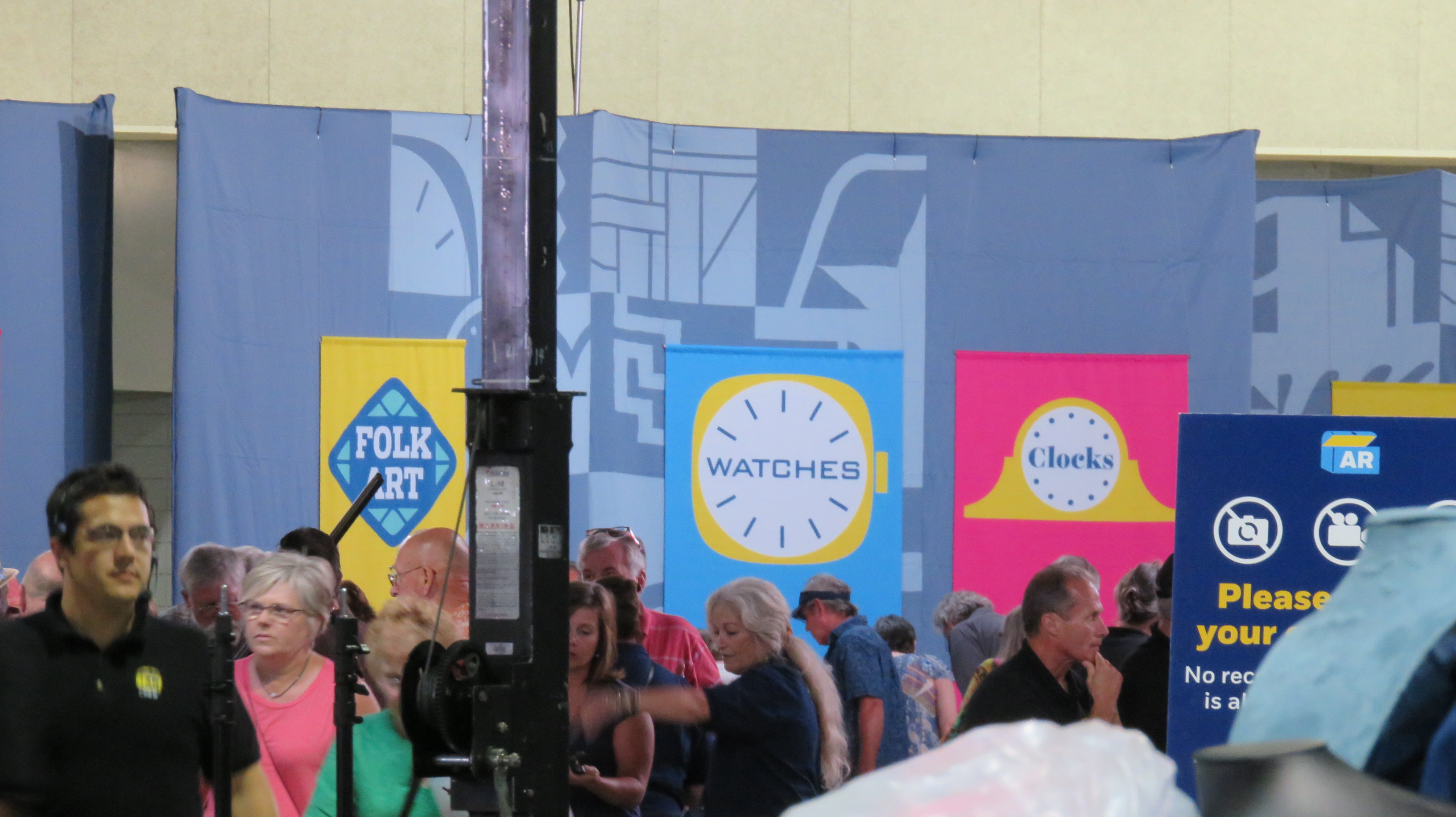 Once inside the official area, attendees were told not to take pictures. I wish that I could have taken pictures because I was surrounded by many appraisers that make regular on-air appearances! I have been watching "Antiques Roadshow" since it first aired on WGBH, Boston's PBS Station and the presenting station for "Antiques Roadshow". I lived close enough to Boston that WGBH came in as a local station. Through the years, I have often watched the people standing behind those who are having items appraised. I have wondered what they were doing. No one in the background ever looks grumpy or tired even though they have been waiting in line for a long time. I have always wondered what it would be like to be one of those people in the background.

As I waited for my turn to approach the appraiser at the “Paintings” table, people were on camera having their items appraised. As I stood in line, I was surrounded by bright lights and three camera sets. (Now I know that these segments are shot using three angles!)

After I had my items appraised, I thought it would be difficult to find my husband in the crowd. It was surprisingly easy. When I found him, he still hadn’t had his book appraised. The volunteers allowed me to wait with him in line.

While we were waiting in line together, we were close enough to see and hear the Keno brothers appraising a large piece of Chippendale furniture. Watching the Keno brothers appraise items within feet of where I was standing was the highlight of my entire visit. They are truly passionate about what they do. Their enthusiasm is palpable and it was a joy to see them in action!

I mentioned the items that my husband and I brought with us to "Antiques Roadshow." Are you wondering what we learned about them?

The first item I had appraised was the watercolor painting with the Picasso signature on the bottom right corner. The appraiser assured me that it was a reproduction. Most definitely a fake! Since I only paid $10 for it, I was not disappointed.

The A.A. Blum etchings (one of them is to the right of the painting in the photo below) were worth $100 - $200 each. They would have worth more if the etchings were not glued to the mats. 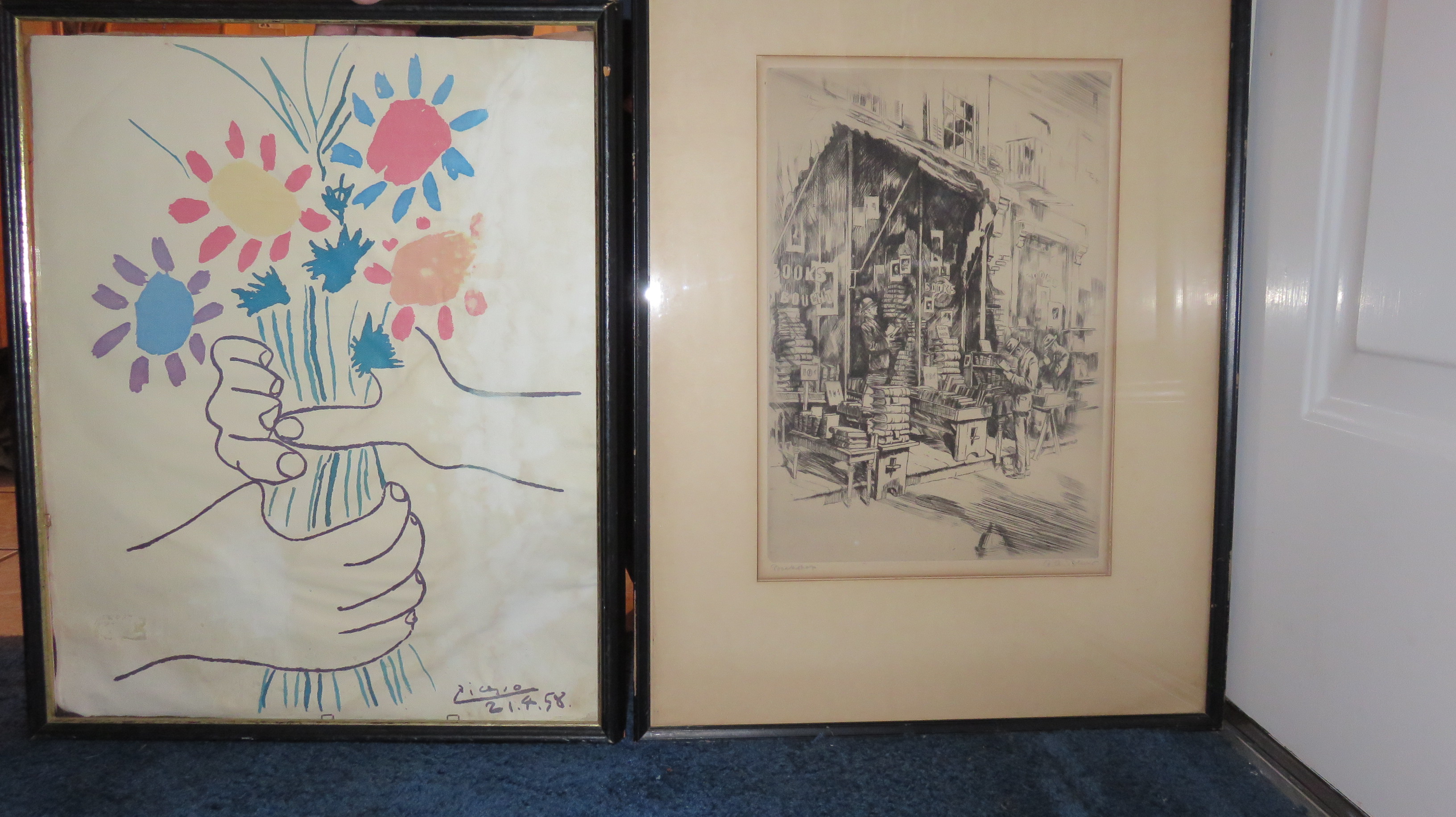 The last item to be appraised was the book my husband bought at a thrift store for 50 cents. When he brought it home, he discovered that it was signed by Bill Clinton! When the appraiser studied the signature and we discussed to whom it was presented and the year it was signed, the appraiser determined that it is an authentic "presentation signature" and valued it between $200 and $300. 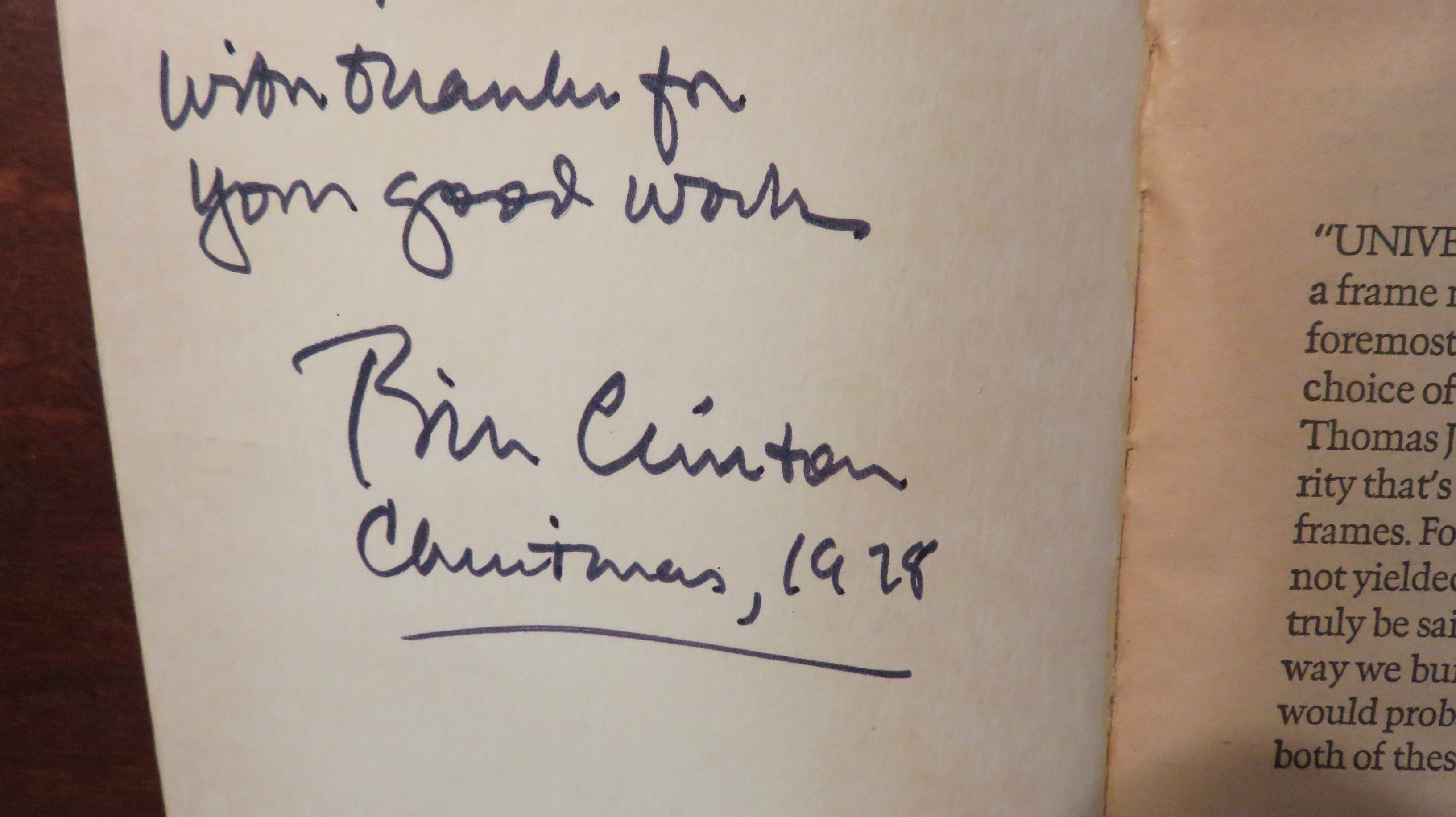 When we were finished with the appraisals, I took my time leaving the official area. All those years that I wondered what was going on behind the scenes as I watched "Antiques Roadshow," I finally got to experience it first-hand. Now I understand why the people in the background never look ornery, even though they have waited a long time in line. No matter how long the wait, it is a special experience and everyone knows it.

I learned a lot about “Antiques Roadshow.” I learned that the appraisers volunteer their time and pay for their own travel and hotel expenses. They have a passion for what they do and it was evident throughout the day. The “Antiques Roadshow” producers and crew are master organizers! The entire experience was smooth. The lines were long, but there were tables of cold water and plenty of chairs available for those who needed a respite from standing in line. It was over 100 degrees outside, but the building was very cool and everyone looked comfortable. George and I are glad that we got to experience the behind-the-scenes action of the “Antiques Roadshow.”

If "Antiques Roadshow" will be visiting your area, I encourage you to apply for tickets. You never know … you might win the random drawing and be chosen to attend! 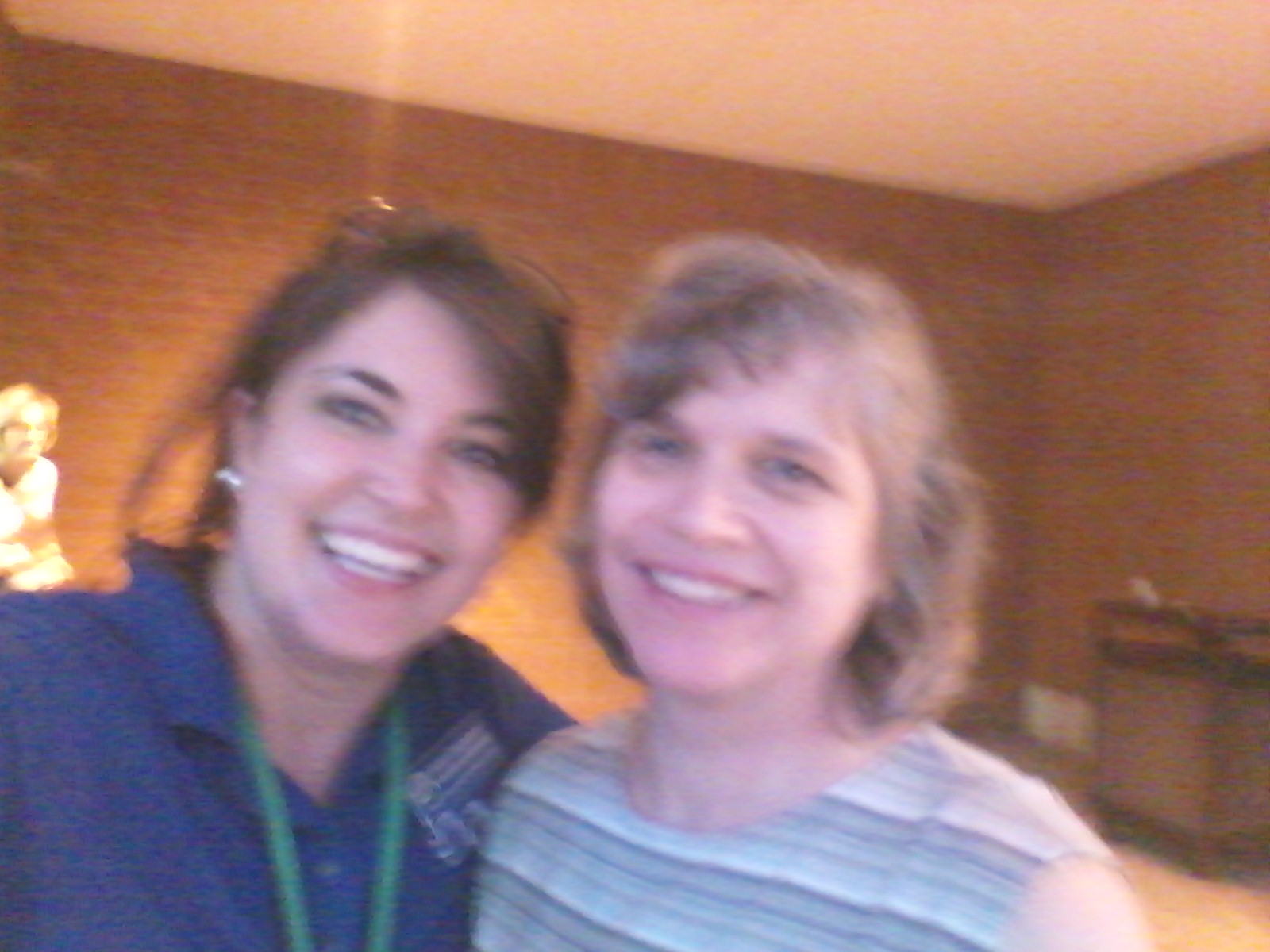 A Connecticut native, Karenne Gionet Saylor now resides in Northwest Arkansas where she works as an educator and freelance writer. While AETN staffers only had a quick moment to meet Karenne in person, we've greatly enjoyed her correspondence and are thrilled to count her among our viewers. We look forward, with great anticipation, to watching her writing career (and, of course, her students) flourish in the years to come.