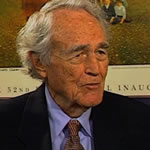 Its hard to grow up in the greater Hot Springs area without knowing who Sid McMath was. In my small community on Highway 5, everyone had a story about Hot Springss glory days and how everything changed after the big lawsuit.

The tales ranged all over the place, from individual antics and famous figures to how Mayor McLaughlin would drive his horses  Scotch and Soda  down Central Avenue. Since my Mama is a local history buff, we also saw things for ourselves on regular summer field trips to walk the promenade, tour the Mountain Valley Water Company, visit The Maurice, see The Southern Club-turned-wax museum and hear a walking history of the town.
Viewed through the rosy tint of nostalgia, Hot Springs gambling era can appear exciting  even glamorous. In reality, though, the life Ive lived and enjoyed wouldnt have been possible without Mr. McMaths reforms.
Tonights episode of "Men and Women of Distinction" will trace McMaths astounding life and discuss the impact he made on our state and the nation, from his school days at Hot Springs High School and the University of Arkansas, to his service as a decorated U.S. Marine officer, and ventures into the political and legal fields.
In Hot Springs, McMaths influence was strongly felt when he returned after World War II and recruited other GIs to run for county office in an effort to break up the Hot Springs longstanding political machine. While Mr. McMath was the only successful reform candidate, as the countys prosecuting attorney, he launched a legal career that gained the nations attention and placed him at the forefront of the postwar reform movement in the South.
In addition to forcing Hot Springs Mayor McLauglin to resign and effectively destroying the Hot Springs political machine, less than 18 months later, Mr. McMath successfully ran for governor. In office, he championed rapid rural electrification, massive highway and school construction, the creation of the University of Arkansas for Medical Sciences buildings in Little Rock, strict bank and utility regulation, repeal of the poll taxes, the preservation of the Arkansas Agricultural, Mechanical & Normal College (now the University of Arkansas at Pine Bluff), open and honest elections, and broad expansion of opportunities for African American citizens. Those efforts forever changed the landscape of our states political system.
And while Arkansass political kingmakers eventually united against Sidney McMaths progressive politics because of his resistance to the Dixiecrat rebellion and refusal to give in to the big businesses and political bosses, McMath pursued a successful career as one of the nations foremost trial lawyers after his second term as governor.  Successful even in the face of handpicked juries, Mr. McMath became well-known for using powerful demonstrative evidence to win cases significant to the citizens point of view.
I cant say Ill ever stop enjoying histories like The Bookmakers Daughter, being intrigued by the gangster legends that float around town or being just a little jealous that I missed the era where greats like Duke Ellington could be found playing in Hot Springs night clubs, Im forever grateful for what Sid McMath accomplished.
Mr. McMaths efforts assure me that my vote matters, made it possible for my familys farms to become modernized and successful,  created support for desegregation and Civil Rights that made it possible for me to meet my best friends in college, and  on some level  enabled UAMS to perform a surgery that saved my Mamas life. His military, professional and personal achievements are evidence that one persons physical and moral courage do matter.  While it might have been difficult to to grow up without knowing who Sidney Sanders McMath was, in my mind, it is very fortunately even harder to grow up in Arkansas without being positively influenced by his life.
Watch Men and Women of Distinction: Sid McMath tonight at 6:30 p.m. to learn more about McMaths influential career. You may be surprised to find out just how much his life has affected yours.
TUNE IN:
Men and Women of Distinction: Sid McMath Thursday, June 14, at 6:30 p.m.