Arkansas PBS > Engage > Blog > Meet me in the park again this weekend! 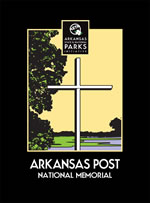 If you haven't been in a park lately, it's time to go! You wouldn't believe how much fun we had last weekend at Pea Ridge National Military Park -- unless of course you were one of the 800 people there, and then you know exactly what I'm talking about.

The first time the cannons fired, I think everybody jumped. The ground seemed to vibrate, my ears rang a little from the blast, and the smoke drifted across the battlefields. Considering they were using only a fourth of the gun powder that cannons used during the Civil War, I'm very glad I wasn't a soldier in the original battles. Phyllis's cooking had all our mouths watering, there was banjo music wafting on the 77-degree breeze, and the re-enactors were incredible and full of information. Living history may be the best way to teach it and keep it interesting.

So, you can join us for more living history this weekend at Arkansas Post National Memorial. We'll be examining Arkansas's only Revolutionary War battle and why the post played such a key role in Arkansas history. There will be small arms demonstrations this week (think muskets instead of cannons), and plenty of room to walk and explore. While the park's primary service is history, there's also incredible wildlife. On our first visit we saw egrets, turtles, a snake, a doe feeding her newborn fawn -- and my very first alligators in the wild! They were only a few feet long, but rumor has it the park has one 14-foot resident in the oxbow lake surrounding the post.

If you're wondering what Arkansas Post is, let me give you a little background. From the NPS Web site:

Settled by the French in 1686, the remote "Post de Arkansae" was the first permanent European colony in the Mississippi River Valley and played a valuable role in the long struggle between France, Spain and England for dominance of the lucrative fur trade.

From the beginning, Quapaw Indians, followed by enterprising European trappers and hunters, were drawn to this area because of its plentiful wildlife. Today, Arkansas Post still offers excellent opportunities for wildlife viewing.

If you haven't ever been to Arkansas Post (near Dumas), I promise you it's worth the drive. It's an incredible park with an incredible past, and I hope to see you all there on Saturday. Don't forget to bring your Arkansas Parks Passport to get it stamped!

The event is completely free and open to the public from 10 a.m. to 2 p.m. Saturday. Bring a picnic, sunscreen and bug spray, and explore you Arkansas parks!