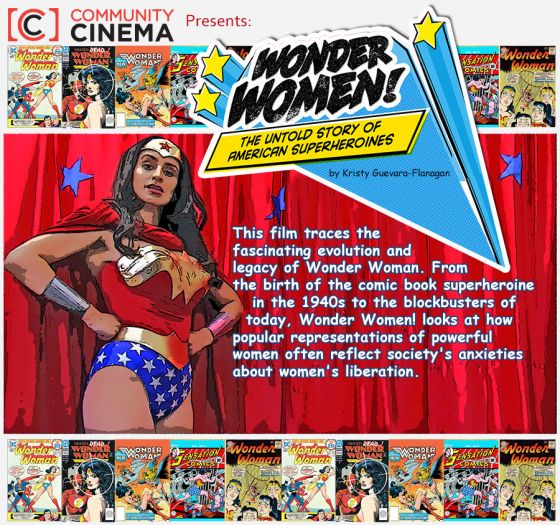 Join AETN in Fayetteville on Sunday, March 17, for a free advance Community Cinema screening of their latest documentary, "Wonder Women! The Untold Story of American Superheroines." The film traces the evolution and legacy of Wonder Woman from the 1940s to present day and also takes you behind the scenes to meet real-life superheroines. Get ready for an enlightening and entertaining counterpoint to the male-dominated superhero genre!

Generally, we now tell girls that they can grow up to be anything they want to be, coping in a highly visual culture that often places greater emphasis on girls and women's appearance than their contributions can be difficult. "Wonder Women!" delves into the topic - and urges women to claim the action genre and media in general as their own to change gender representations.
But how does that involve Wonder Woman? A groundbreaking figure in the comic world, Wonder Woman was the unlikely brainchild of a Harvard-trained pop psychologist named William Moulton (who, incidentally, also invented the predecessor  polygraph test - lasso of truth, anyone?). The documentary explores how Wonder Woman's original, radical World War II presence transformed into her somewhat uninspiring 1960s incarnation as a fashion boutique owner until she was dramatically resurrected by Gloria Steinem and the women of Ms. Magazine.
Join us to screen the film and discuss how Wonder Woman's legacy continues today - and why, perhaps, she is yet to make to the big screen!
The northwest Arkansas screening will be held in partnership with KUAF 91.3 at the Fayetteville Public Library, 401 W. Mountain Street, Sunday, March 17, at 2 p.m. We'll discuss the film with a panel group immediately after the screening. Panelists at our Fayetteville screening include: Dr. Sean Connors of the University of Arkansas, whose dissertation studied adolescent readers conceptions of graphic novels; Jeremy Dubbs of Northwest Arkansas Community College, a professor of communications with a background in gender studies; and Stephanie Lewis of Northwest Arkansas Community College, professor of art and art history.
For more information and a schedule of upcoming screenings, check out our Community Cinema page at aetn.org/communitycinema.
JOIN US:
Northwest Arkansas "Wonder Women! The Untold Story of American Superheroines"
Sunday, March 17, 2 p.m.
Fayetteville Public Library
401 W. Mountain St., Fayetteville