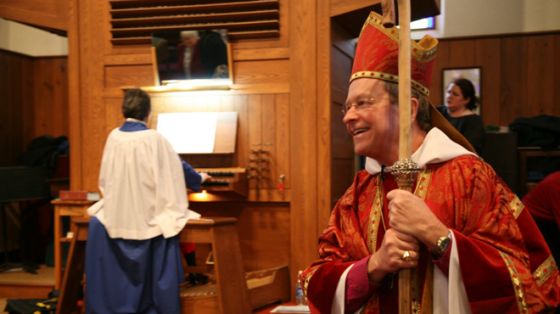 Does God's love have limits? This month's Community Cinema season finale, "Love Free or Die," explores the question from the viewpoint of Gene Robinson, the first openly gay person to be elected bishop in the high church traditions of Christianity. Join us in North Little Rock's William F. Laman Library Tuesday, June 4, at 6:30 p.m. or in the Fayetteville Public Library Monday, June 17, at 6:30 p.m. to watch the film and discuss afterwards.

In 2003, Robinson's elevation in the Episcopal diocese of New Hampshire ignited a worldwide firestorm in the Anglican Communion that has threatened schism. Even as he has pushed for greater inclusion within his own church, Robinson has become a standard bearer in the fight over the rights of LGBT people to receive full acceptance in church and state.

The film traces Robinson’s journey as he steps onto the world stage, traveling from small town churches to the Lincoln Memorial, where he delivers the invocation at Barack Obama’s inauguration; to London, where he is scorned and relegated to the fringes of a once-in-a-decade convocation of bishops to which he is deliberately not invited; to a decisive meeting the of the Episcopal Church in California where Robinson steadfastly calls for everyone to stand for equality. Through such efforts, Robinson seeks to inspire bishops, priests and ordinary folk to step out of the shadows to change history.

The Community Discussion will be led by Daniel Davis, Vice President of The University of Arkansas at Little Rock's The Alliance.