The Arkansas Educational Television Network is proud to remember and honor former Arkansas governor and U.S. Senator Dale Bumpers, who passed away at age 90 on Friday, Jan. 1, 2016. A Charleston, Arkansas, native, Bumpers is best known for his extraordinary political career, which lasted for more than three decades.

A somewhat inexperienced political candidate, Dale Bumpers became known as a “Giant Killer” with his meteoric rise through Arkansas and national politics. Against all odds, in 1970, Bumpers defeated the better known Orval Faubus in the democratic primary election for governor and went on to unseat incumbent Republican Governor Winthrop Rockefeller in the general election. When he took the Senate seat in 1974, defeating five-term senator J. William Fulbright, Bumpers began a quarter-century of service in Washington D.C.

Long recognized for his oratorical skills, weeks after his 1999 retirement, Bumpers returned to Washington to give closing arguments in fellow Arkansan Bill Clinton's Senate trial. 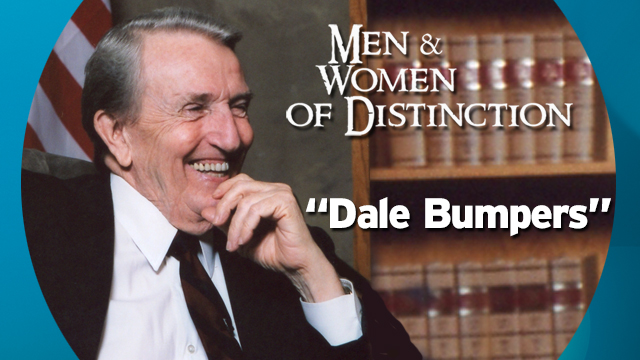 In the special “Men & Women of Distinction: Dale Bumpers,” Arkansas journalist Ernie Dumas interviews Bumpers in three parts. “Part 1” discusses Bumpers’ childhood in Charleston and his life before politics; “Part 2” covers his years as Governor of Arkansas and historic run for the U.S. Senate in 1974; and “Part 3” examines his years in the Senate and retirement from politics.


In the episodes, Bumpers shares his early life experiences — particularly his family’s enthusiasm for politics and public service, his education following his service during World War II and his marriage to Betty Flanagan — and how they influenced his political career.

The special series provides an in-depth and fascinating examination of an extraordinary talent who made an outstanding impact on Arkansas and the United States as a whole. We hope that you will join us in the celebration of his extraordinary life. “Men & Women of Distinction: Dale Bumpers” is available online for viewing any time at aetn.org/programs/menadwomenofdistinction/dalebumpers and will air on AETN-1 Jan. 6-8, 2016 at 6:30 each night.