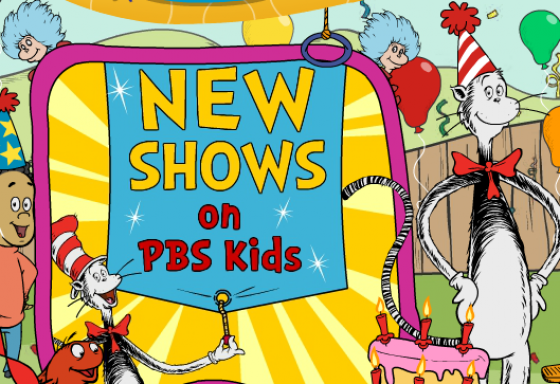 Two new episodes and an online game debut in commemoration of Dr. Seuss birthday week.  Its his 109th birthday on March 2, and PBS KIDS has new content on-air, online and on mobile. Viewers can join everyones favorite cat in two new episodes of "The Cat in the Hat Knows a Lot About That!"  Also, check out the Swirly Whirly Pearl Hunt online game and video content online and on mobile.

"The Cat in the Hat Knows a Lot About That!" will feature two brand new episodes. Rumbly Tumbly / Planet Name Game features a super shrunken trip into Thing One's stomach as well as a whirlwind trip to each of the eight planets, and Top of the Sky / Jiggle Bones follows the Cat, Nick and Sally as they travel to Audrey the Astronauts space station and visit Dr. Giggles to see why bones are important.
The celebration will continue online and on mobile. Video clips from both episodes are available for free online at pbskids.org/video and on the PBS KIDS Video App.
Viewers will also have a chance to interact with the Cat in the Hat with the new Swirly Whirly Pearl Hunt game. In this game, the Swirly Whirly Ocean is filled with aquatic creatures of all colors, shapes and sizes, and players can catch a ride on the Thinga-ma-jigger to travel deeper and deeper through silly, Seussian schools of fish. The Swirly Whirly Pearl is waiting somewhere far below, along with the chance to create a personalized school of mix-and-match sea creatures.
Check out these new episodes!
Rumbly Tumbly / Planet Name Game
Rumbly Tumbly
Nick's hungry tummy is rumbling! But why do our stomachs make noises when they're hungry? A super shrunken trip into Thing One's stomach will show them the answer! They learn how chewing and stomach juices help to break down the food, and the tummy sounds are actually the stomach working. When your tummy is empty, the sounds are much louder! There's only one way to quiet Nick's rumbly tumbly… a chewy chocolate chunky chunk chip cookie!
Planet Name Game
Nick and Sally have run out of things to name in the garden. Good thing Cat needs help putting his model of the solar system back together  they can help him name the planets! Off in the Space-a-ma-racer they go on a whirlwind trip around the universe, learning the names of the eight planets as they go.
Top of the Sky / Jiggle Bones
Top of the Sky
Sally, Nick and Cat are playing with their toy rocket. Using the Cat's "Whoa-Look-At-It-Go-Launcher," he shoots the rocket up, up, and up! But now they need to go find it. Off to the top of the sky! They keep going higher until they're in space! They meet Audrey the Astronaut who explains that there is no top to the sky. The sky turns into space and space goes on forever!  Just when the kids think their rocket is lost, they find it in Audrey's space station. Though they can't launch their rocket to the top of the sky, launching it to the moon is just as cool!
Jiggle Bones
Nick and Sally are wiggling and jiggling like the jelly mold in front of them. But they can't quite wiggle the same way. How come?  Bones of course! announces the Cat. Bones keep their bodies from being wiggly and jiggly. But why do they need bones? A visit to Dr. Giggles will answer that question! They learn about the big strong bones that help us stand and walk, the small bones that help us bend and move, and the all important bones that help protect our squishy bits! Even though they won't let you wiggle and jiggle like jelly, bones are important!