Walking off the bus to a roaring round of applause at Mary Washington University (UMW) today, I almost instantly understood the importance of community. As we approached the welcoming crowd we were greeted with smiles, kind words of encouragement and a genuine sense of joy that we were continuing the legacy of the Freedom Riders. 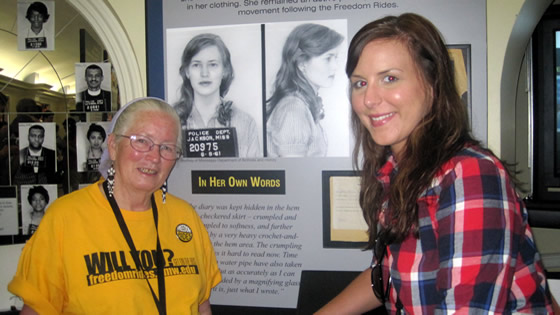 With Freedom Rider Joan Trumpauer Mulholland standing next to her mug shot at the student produced exhibit at the University of Mary Washington on our first day.

UMW has spent months preparing for the Student Freedom Ride, creating an exhibition, holding on campus events about the rides and heavily promoting Charles Reed, Jr.  a graduate of UMW as of today. The administration, faculty and student body made a concerted effort to promote both the work of the original riders and the next generation of student activists. They made myself and the other students feel like we were representing something bigger than ourselves.

As a young person attending college in a relatively small community (or at least what feels like a small town atmosphere), I have found that the same support I witnessed today at UMW is sometimes lacking in my own environment. That is not to say that civic engagement in not encouraged at my campus, but I do feel that there is always more that can be done. The Civil Rights Movement, African American history, and the significance of the Freedom Riders are topics that should serve as constant reminders of this countrys long struggle for equality.

Although institutionalized segregation ended many years ago, more subtle forms of segregation and discrimination still exist  a sentiment expressed by many original Riders on our trip. In Arkansas, there is a clear divide between black and white neighborhoods and schools as a direct result of years of social inequality. In most cases I dont think it is intentional segregation, but rather acceptance of the status quo. However, I strongly believe that in order to transform our culture and create a more balanced economic system, we need to acknowledge as a community that we will no longer accept a way of life just because thats the way its always been.

Sometimes all it takes to trigger action is a call to action. Its easy to feel overwhelmed by the enormity of the many issues going on in America and throughout the world, and when you feel alone in your desire to implement changes in your own community it makes it that much more difficult to feel empowered and initiate change. But when people come together to vocalize their needs and wants, and older generations show young people that they believe we really can do great things, the dynamic will slowly shift from apathy to activism.