The day before the original Freedom Riders departed Washington D.C. for the first ride in 1961, they came together in what was half-jokingly referred to as the last supper. They settled on Chinese food  unfamiliar cuisine to a then 19-year-old John Lewis.  I say half-jokingly because, though they hoped for the best, they knew that the consequences of their impending ride could potentially lead to death. Their lives were on the line and they had spent months preparing for this nonviolent movement to eradicate segregation in the South.

Tonight, as I sat amongst my fellow student riders and Ray Arsenault (the author of Freedom Riders: 1961 and the Struggle for Racial Justice) eating Chinese food just as the Freedom Riders had done, I began to understand the weight of the situation. The journey that began 50 years ago at a Greyhound bus station in D.C. will continue tomorrow from the very same place. 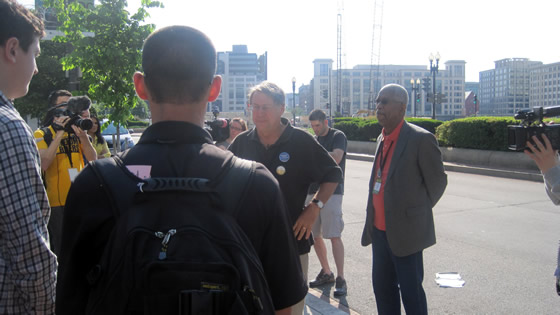 Author of Freedom Riders, Ray Arsenault and Freedom Rider Rip Patton standing in the same place the bus departed for the first time in 1961 (in DC) before we boarded.

Earlier this afternoon, Jalaya Liles Dunn from the Childrens Defense Fund gave an incredible presentation about charting the next route for freedom and justice. As she outlined the ways in which we can improve our communities, she emphasized the importance of understanding ourselves, engaging others who share a common thread, and creating the story of now.

The Freedom Riders had a story of self and built themselves into a story of we, she said.

They created the story of now, added Peter Davis, a student rider from Cambridge, Mass.  On May 17 when the bus is emptied and we go our separate ways, we cannot forget the importance of writing our own story of now. As individuals we are weak, but together there is no stopping us.

It cannot be done alone and it certainly cant be done with just 40 students. It will take an entire movement of young people to become civically engaged and respond to the pressing issues facing our generation. Whether it is racism or other forms of intolerance, education or foreign policy  there are a number of issues that directly affect each of our lives and they will not be corrected if we continue sitting by, apathetically waiting for someone else to fix the problem.

Diane Nash eloquently said, You have no control until you exert control. Shes right  our voices will not be heard until we turn up the volume.