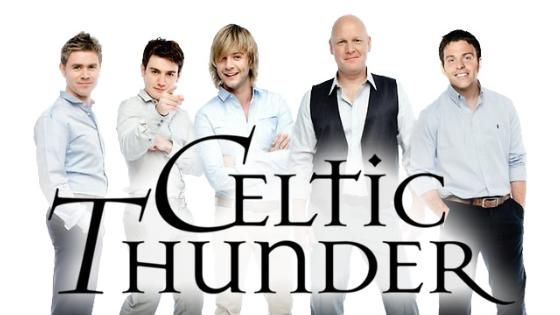 A couple of weeks ago AETN held a "Celtic Thunder Love Letter Contest" giving away concert tickets to the winners. I, of course, sent in a letter and encouraged my mother to do the same. How grateful she was that I had when she received an email a week later saying that she was a winner. Shortly after I learned my mother had won I checked my email and was doubly surprised to find that I had a congratulatory email in my inbox as well!

So, we called my brother and offered him and his wife the extra set of tickets. It was now a family trip. We made it safely to the lovely city of Little Rock and to the Robinson Center. We took our seats (which were great) and settled in for a wonderful evening, and wonderful it was!

My mother and I have been to Celtic Thunder concerts before, but it was the first for my brother and his wife - and we were excited to share it with them. It was fun for me having my sister-in-law tap on my shoulder after a song and ask, Which one was he? to try to learn the members by name. We all had so much fun, and I know it is safe to say that Celtic Thunder gained two new fans that night.

Everyone loved the beautiful music. We heard old classics and new favorites and loved watching the banter between the guys onstage. They all love what they do, and you can clearly see this in their performances.

If someone had told us a week before the concert that we would all four be sitting in the Robinson Center clapping along to Raggle Taggle Gypsy, we wouldnt have believed them.
After the concert, we were told that we could wait for the guys and that they would give out autographs. My sister-in-law had the clever idea of having them sign the jacket she was wearing and I decided to do the same.  It was so great getting to meet the guys for a moment and get their autographs. They are true performers and true gentlemen as well.

After returning home thinking it was time for all the excitement to die down, I received another e-mail asking if I would like to write a blog about my experience. I am honored to be given this opportunity. My family and I are truly grateful for all of the blessings we have received these past weeks and I want to thank everyone at AETN for being so kind and generous. If it werent for AETN the night would not have been possible. I am truly thankful for Public Television and all its brilliant programming.