Hi, I’m Justin Blake Crum, AETN producer, and this post is a look behind the scenes into what we’ve discovered while creating AETN original production “Bell Ringer: The Invisible Brain Injury.”

Two years ago when someone mentioned the word “concussion” to me, I immediately thought about football. Concussions and football were inseparable in my mind. Then, I was given the chance to produce a documentary on concussions and, after two years of research on the topic, the way I think about them has changed. The brain injuries sustained in football are definitely a concern for young athletes, but that’s because any brain injury is a concern, no matter how it happens. And, as I’ve learned, concussions can happen in a variety of sports. 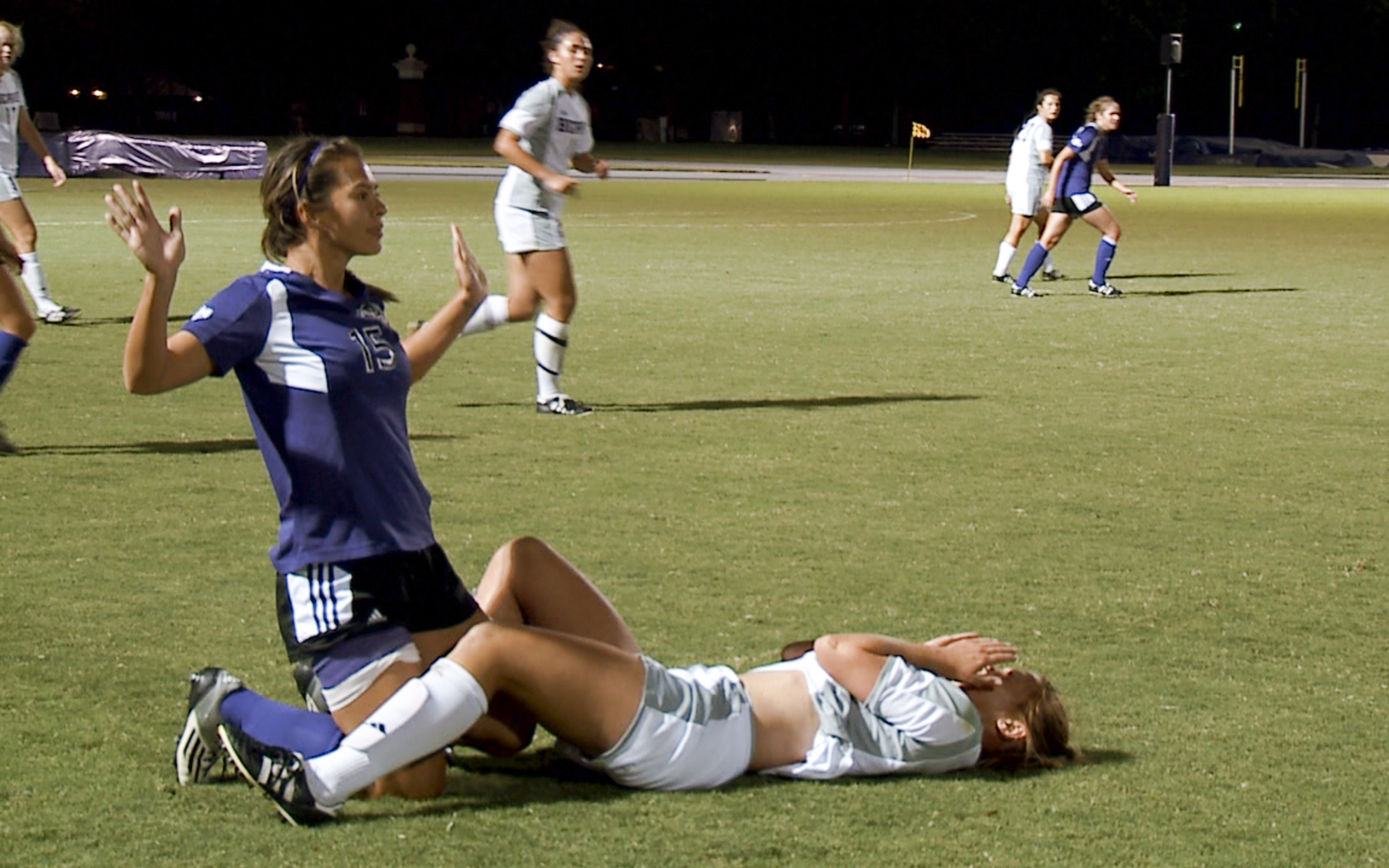 During my research, for example, I stumbled upon a statistic showing the high number of concussions in soccer, specifically girls soccer. At first I dismissed such a notion, because how could girls soccer really be an issue? But the statistic kept reappearing. I decided to look into it, so I grabbed a camera and set out for a local girls soccer game. 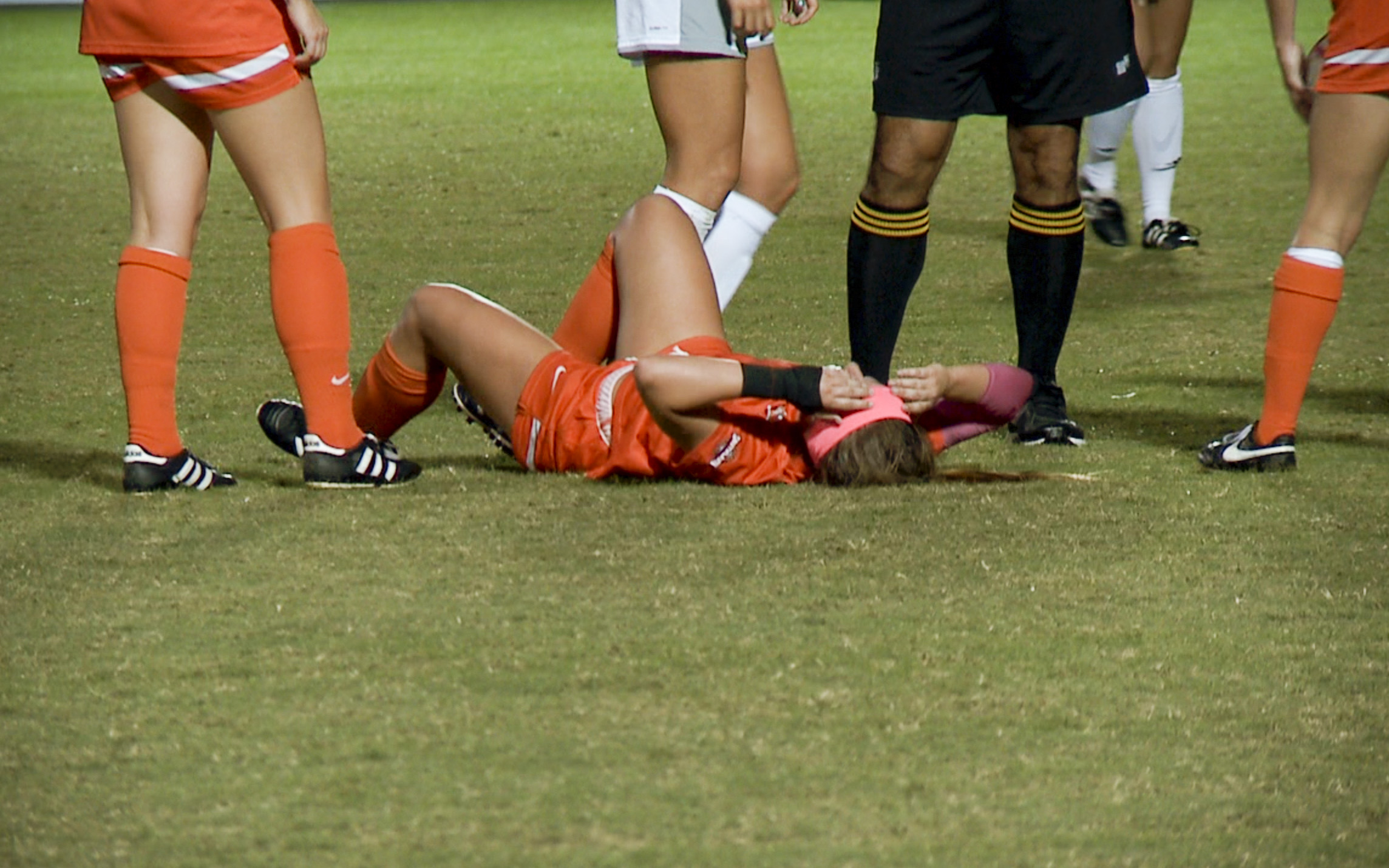 I was hoping to film an impact in slow motion, some kind of collision that would bring this statistic to life for me. Honestly, I didn’t really believe it would happen. Or if it did, it would take weeks of filming to capture it. So I stood on the sidelines, hit record and prepared to have a very boring evening filled with useless footage. But I was very, very wrong. Within the first few minutes of the game, girls were attacking the ball, frequently colliding into one another or falling against the ground. And the longer the game went on, the sloppier the play became. One goalie received a swift knee to the face from an opposing player; two others went airborne attempting to head a goal kick, only to collide head-to-head instead. The game was brutal at times. I cringed often, or at least more often than I expected. Needless to say, I was very happy. Not for the players, but because my footage would be anything but boring. 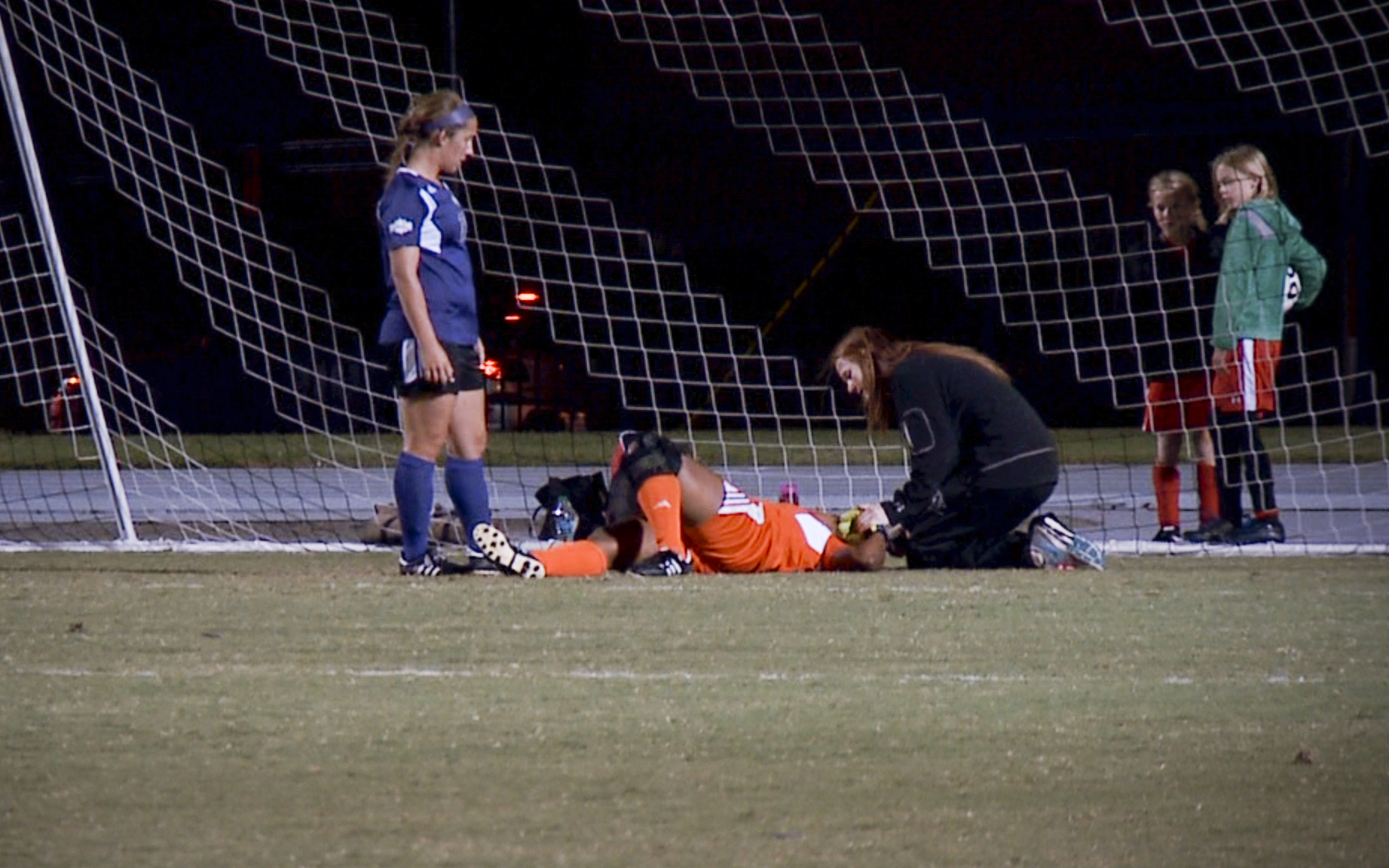 After filming multiple games and seeing similar results, we began filming interviews with experts and former professional players. One interview was with women’s soccer legend Michelle Akers, who was named the FIFA Female Player of The Century in 2000.

When she began to describe the concussions she received during her playing career, everything I saw on the field beforehand was reaffirmed. I cringed once again. 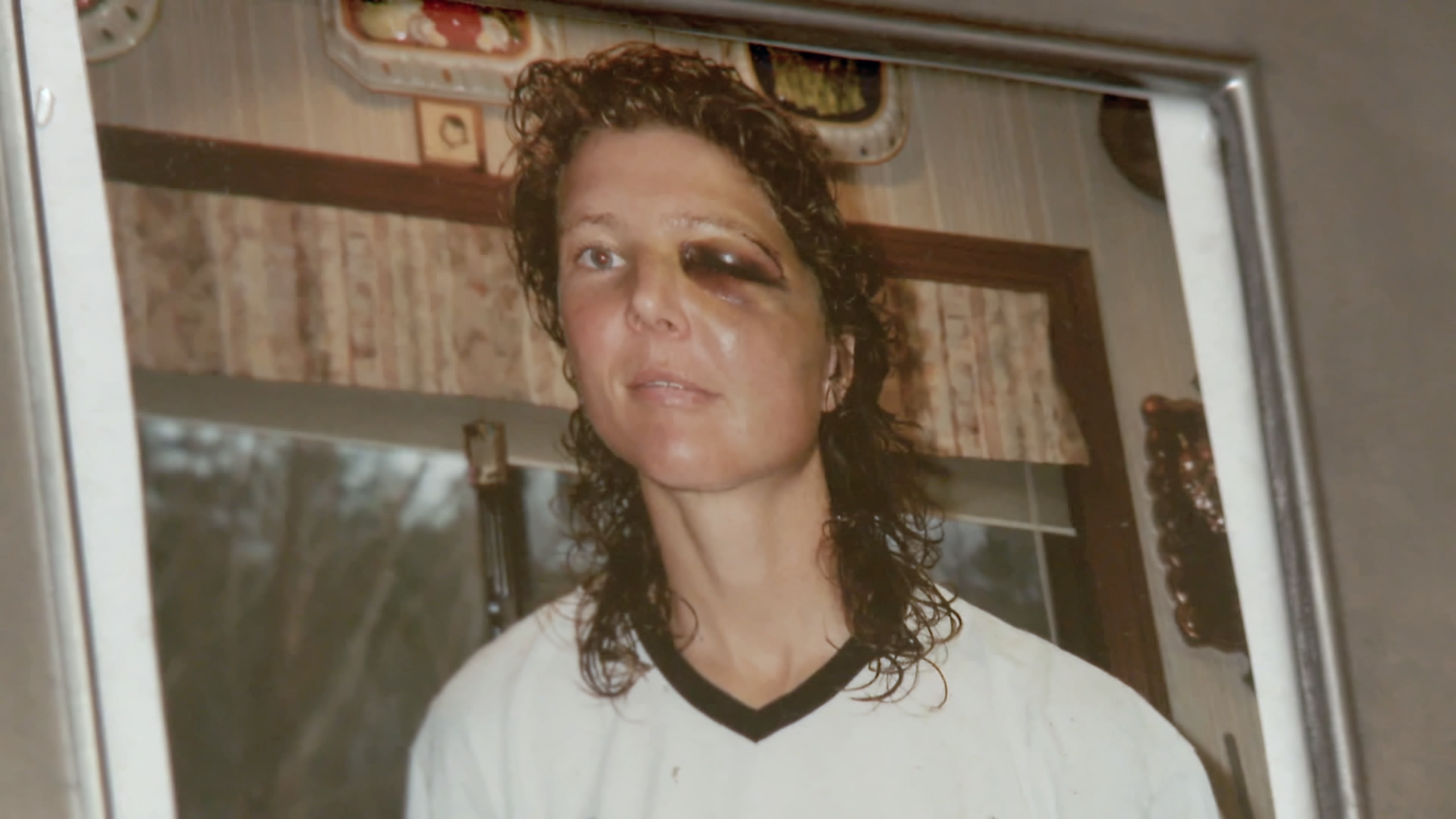 She told us about one impact in particular that broke her face, specifically her orbital bone, nose, and cheek, because just like the young players I just mentioned, she headed her opponent’s skull rather than the ball.

“I was going to clear it out of the stadium,” Akers said, “but I caught the back of her head. I was in the locker room doing halftime talk and blood was just coming out. I was in the hospital for a couple of days for the concussion, I couldn’t get up to walk.” 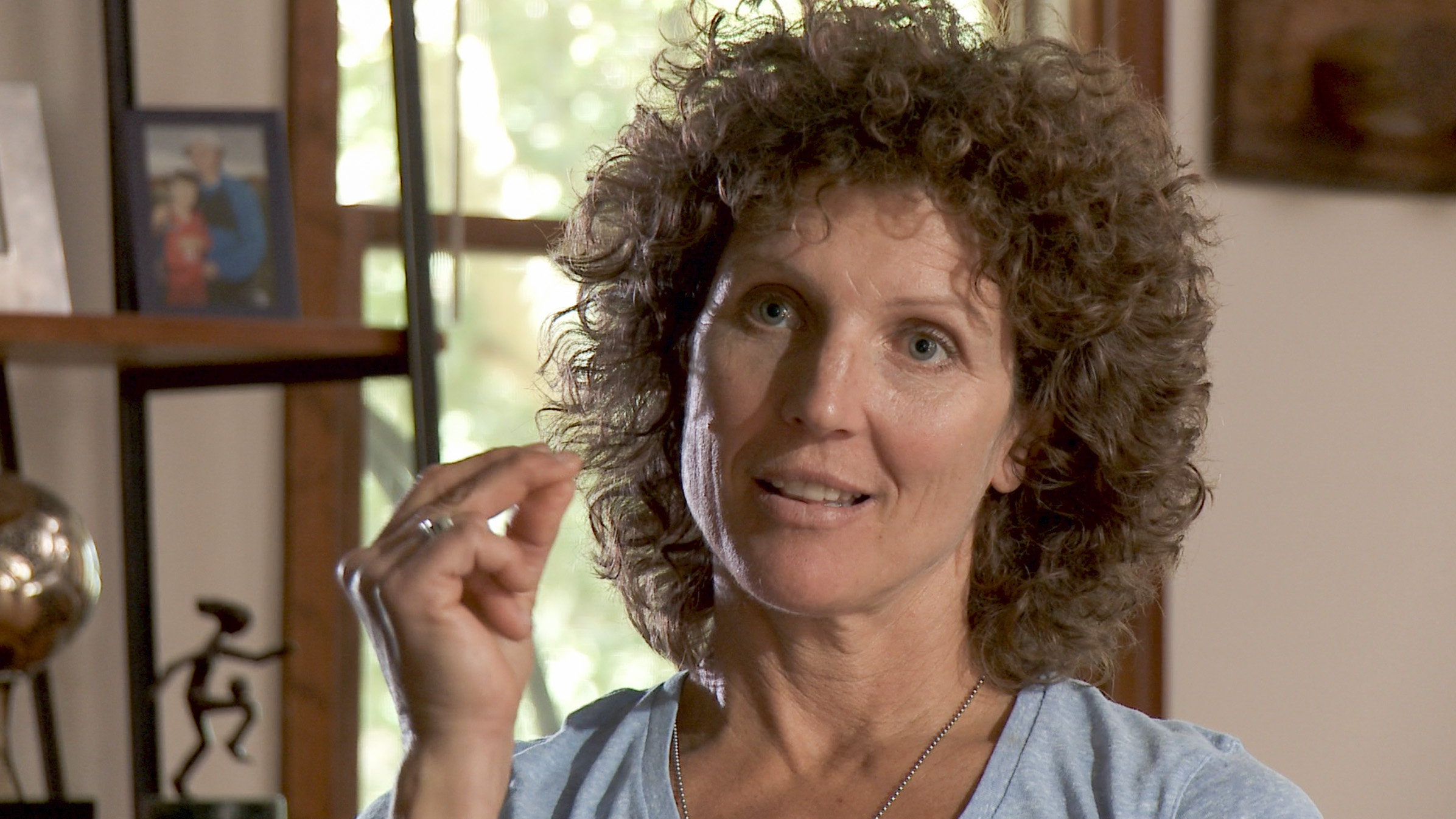 The injuries she described were as gruesome as you would find on any football field. And the effects she went through because of these injuries were significant; she described playing with headaches, feeling foggy and having debilitating migraines after tournaments. She even felt like her head was frequently swollen, which persisted until she finally retired.

Let me just say that I don’t share these stories to scare anyone away from soccer, or any sport, and I truly believe sports are extremely valuable for our youth. But any form of athletic competition has the potential for danger, because competition in itself demands it. Competition is about pushing yourself, testing your limits, and giving everything you’ve got. Because of this players will always want to play, no matter how they feel. That’s how Akers played the game, and many other players we spoke to were the same way. In the case of concussions, the greatest danger is a player continuing to play with concussion symptoms. A brain injury that is mishandled, that isn’t reported or detected (and therefore not allowed to heal) has the potential to lead to post concussion syndrome or even diminished cognitive function later in life. And while that competitive streak doesn’t necessarily cause a concussion, it does keep the player in the game, even when he or she shouldn’t be. 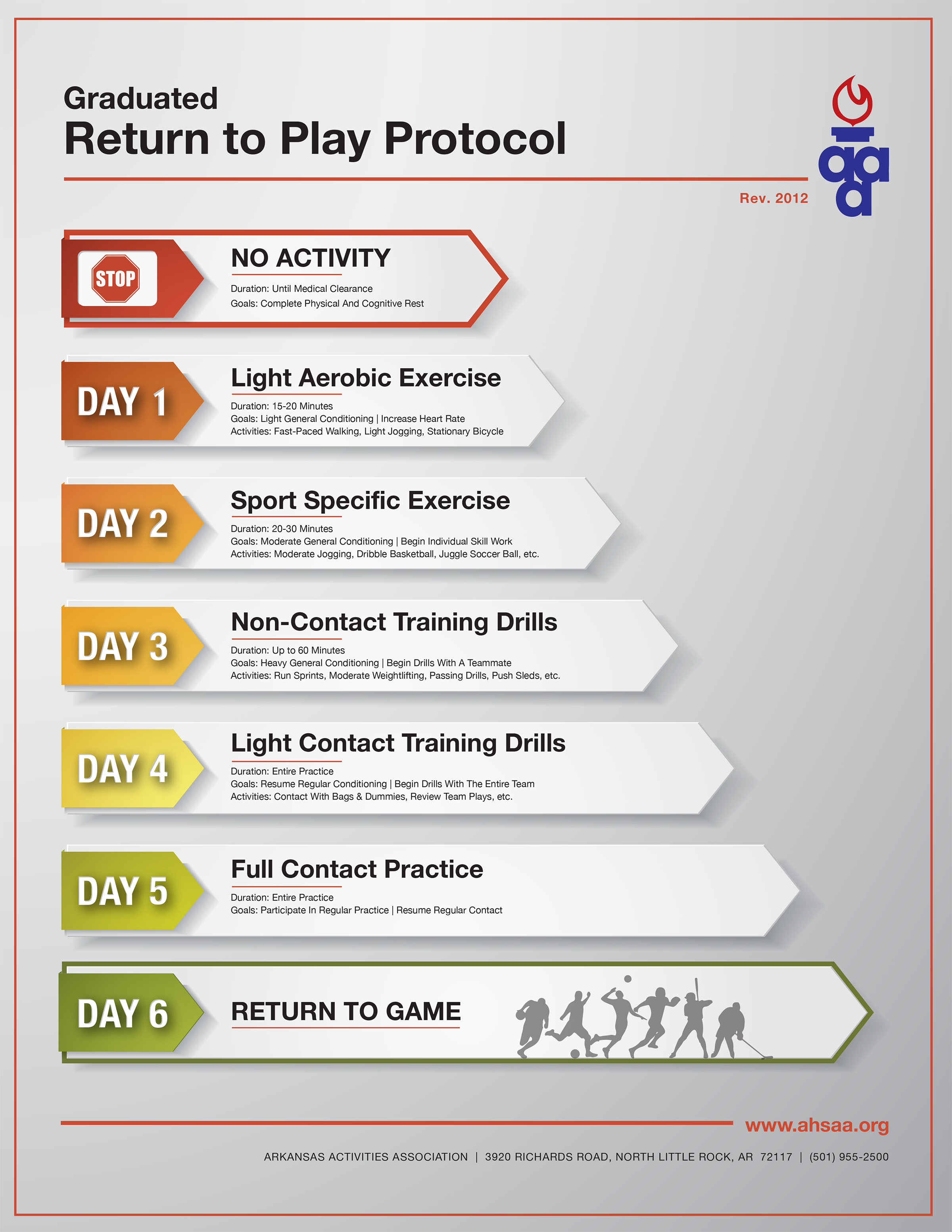 It’s not just football players, or even soccer players, who attempt to play through brain injuries. These injuries can and will occur in many, if not most, sports. The idea that you have to hit your head in order to suffer a brain injury is actually false. You can suffer one from a whiplash effect as well, and whiplash is much more common than a head-to-head impact. Anyone running at high speeds can fall and hit the ground, and that could be enough. So when a baseball player dives for a fly ball in the outfield, or a basketball player drives into the lane and trips, or a cheerleader falls from the top of the pyramid, those instances can all lead to a brain injury even though the head was never impacted. And if that concussed athlete shakes it off and keeps playing, which he or she will most likely try to do, that puts him or her at even greater danger for long term risks, because they never give their brain a chance to heal.

That’s why it’s important to look for concussion symptoms in any sport, and when we suspect one has occurred, we need to take the child out of the game. As the saying goes, “When in doubt, sit them out.” Brain injuries do not discriminate based on sport or age, which means we need to know how to protect even the athletes on the so called “safe sports.”