Arkansas PBS > Engage > Blog > Be Sure to Watch! "India with Sanjeev Bhaskar"

The WORLD Channel introduces popular UK actor, comedian and writer Sanjeev Bhaskar, who brings his trademark humor and insight to a series of journeys across India. 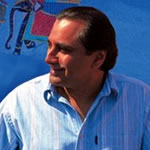 India was once regarded as an almost mythical land; a land of untold riches, of the Taj Mahal and the tiger  and in some ways, it still is. But over the past 60 years, India has changed more rapidly than any other nation on the planet. Behind the Bollywood kitsch and the lurid colors, India is now a country coming of age. Today, the worlds finest software engineers live alongside abject poverty, and state-of-the-art call centers nestle in among the shanty towns and crumbling temples.

Born and raised in Britain but with an Indian heritage, Sanjeev Bhaskar is in a unique position to bring this extraordinary country to life for a 21st-century audience as he gets under the skin of the worlds latest superpower, a country of chaos and contradictions.