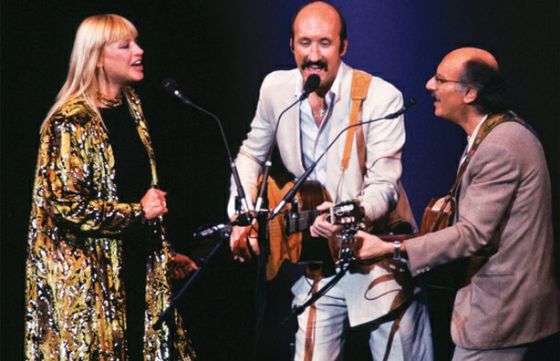 AETN Arts Fridays March 16 starts at 6:30 p.m. with Celebrating Arkansas IV and then the Peter, Paul & Mary 25th Anniversary Concert at 8:30 p.m.  Celebrating Arkansas IV features the bargains on 64…130 miles of yard sales, flea markets, and antiques.  Peter, Paul and Mary celebrate the 50th anniversary of the formation of the trio in Greenwich Village and the 25th anniversary of their very first PBS special.

Bargains Galore on 64 is 130 miles of yard sales, flea markets, antiques and collectibles, all located along U.S. Highway 64 from Fort Smith to Conway, Arkansas. It's an annual event held on the second weekend in August, from Thursday through Saturday.

Most of the communities along the highway  which parallels the more heavily trafficked Interstate 40  participate in the festival, with individual yard sales, flea markets, community-wide sales and antique shops getting in on the action. Organization of the event varies from town to town, with some Chambers of Commerce, Main Street Offices, and advertising and promotion commissions helping as sponsors. The three-day event also attracts hundreds of merchants, from professional antique dealers to people cleaning out their attics. Enterprising individuals, civic organizations, churches and other groups offer just about everything for sale, including refreshments and baked goods.

Find out more about all of our "Celebrating Arkansas" segments.

"Peter, Paul And Mary 25th Anniversary Concert" features songs that became, for many, the soundtrack of their generation. In an era in which folk music became Americas messenger of hope, Peter, Paul and Mary sounded a call to conscience that, to this day, remains an enduring part of our national quest for equity and justice.  Songs include such timeless classics as Puff, the Magic Dragon, If I Had a Hammer, Blowin in the Wind, Where Have All the Flowers Gone? and Leaving on a Jet Plane.