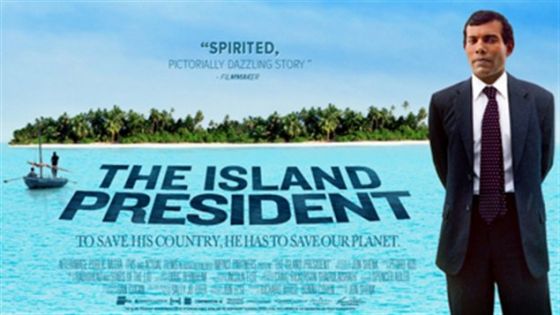 Depending on who you're speaking to, climate change can be a touchy subject. But, no matter the political temperature surrounding the topic in the United States, it would be difficult to find any individual more deeply touched by global warming than a Maldivian.

At most just six feet above sea-level, the Republic of the Maldives, an island nation in the Indian Ocean made up of twenty-six atolls, is generally recognized in the West as an island paradise - a home to fantastic resorts. However, as former president Mohamed Nasheed has reminded the globe, it is also home to a people in critical danger of losing their home.
"The Island President" tells the story of Nasheed's first year in office confronting a problem greater than any other world leader has ever faced - the survival of his country and everyone in it. After bringing democracy to the Maldives after 30 years of despotic rule, Nasheed then tackled an even greater challenge: as one of the most low-lying countries in the world, a rise of three-feet in sea level would submerge the 1,200 islands enough to make them uninhabitable. In his administration's efforts to salvage the tiny country's opportunity to survive the rising waters, Nasheed takes audiences behind the scenes for a rare glimpse of the political horse-trading that goes on in top-level global politics.
Join us for free Community Cinema screenings of "The Island President" in North Little Rock and Fayetteville to learn more and share your thoughts Tuesday, April 2, at 6:30 p.m. and Sunday, April 21, at 2 p.m.
JOIN US:
Community Cinema Screening at William F. Laman Library
presented in partnership with KUAR 89.1 FM
Tuesday, April 2, 2013, 6:30 p.m.
Community Discussion Panelists include Brian Broussard of Verve Solutions, Uta Meyer of Audubon Arkansas and Robert Hunter of the Arkansas Department of Environmental Quality
Community Cinema Screening at Fayetteville Public Library
presented in partnership with KUAF 91.3 FM
Sunday, April 21, 2013, 2 p.m.