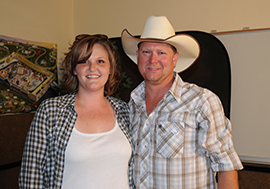 So I promised to tell you more about Arkansas PBS's My Source campaign. And what better way to start than with my interview with Tracy Lawrence last week in Benton?

My Source was developed by the Corporation for Public Broadcasting as a way to increase awareness of public broadcasting, both television and radio. The basis of the project is to find public broadcasting users (and rabid fans) and record their stories, be it in print, online or on video. At the end of the interview, the individual shares their unique tag line, phrased as "Arkansas PBS is my source for…."

These interviews are not scripted. We specifically seek out people -- from our volunteers and members, to regular viewers and celebrities -- who value public broadcasting and want to share their experience with others.

And you're asking yourself what Tracy Lawrence has to do with any of this. Well, he was an Arkansan for many years and has also made several appearances on the classic PBS series "Austin City Limits."

We met up with him at the Benton Wal-Mart where he was promoting his new album, "The Rock," thanks to Coca-Cola and KSSN. After autographs and great stories, we had the opportunity to tape a brief interview about his experience with "Austin City Limits." As soon as it's edited, I'll share it with you. My favorite story from the event: While signing everything from CDs to t-shirts and guitars, Tracy made the comment that at his last signing someone brought him a toilet seat. What did he write? "I hope everything comes out alright."

Yes, I'd say all our interviews have been that quirky and fun. Who else have we interviewed you might be wondering?

One of my personal favorites was Charlaine Harris, author of the Sookie Stackhouse Southern Vampire novels that have turned into the hit HBO series "True Blood." She was so much fun to talk to, and we even got to see her red carpet outfit for the premiere of "True Blood" last fall. She later came to Arkansas PBS to tape an episode of "Barnes and a Conversation with…Charlaine Harris." Check it out at http://www.aetn.org/programs/barnesand/archives/posts/barnes_and..._a_conversation_with_charlaine_harris if you haven't seen it yet.

Im working to get more of the spots online to share with you, but until then you can read some viewer comments, watch our community impact spots, and share your own story at http://www.aetn.org/engage/mysource.

Arkansas PBS is my source for interviewing the most interesting people in Arkansas.