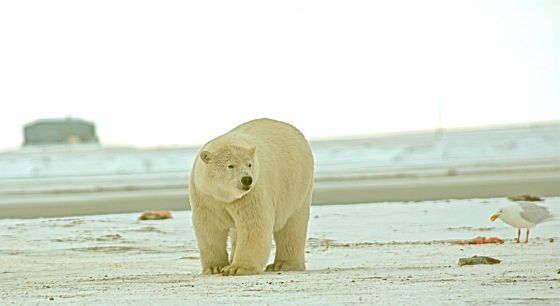 Starting at 7 p.m., take a wild journey this AETN Exploration Wednesday from the upper reaches of Alaskas northern shores to the tiny world of quantum physics. Nature continues its "Bears of the Last Frontier" series with Artic Wanderers at 7 p.m. and NOVA  Fabric of the Cosmos: Quantum Leap takes us to a whole new world of quantum mechanics at 8 p.m.

In the tiny North Slope town of Kaktovik, Chris Morgan invites us on another adventure  this time to observe Alaskas majestic polar bears. Unfortunately, with winter approaching, the bears are struggling to hunt on sea ice that takes longer to freeze each year. In some cases, their fat reserves are dwindling. As we follow Morgan and Barrows local hunters out in early spring, the human beings face struggles similar to the polar bears. Finally, bringing the three-part series full circle, in the late spring, Morgan takes us to the North Slope of the Brooks Range where countless caribou cover the land  and the grizzlies are waiting.
At 8 p.m., get ready for a wild ride into the universe of the tiniest scales as Brian Greene takes into the weird and wonderful realm of quantum physics. Visiting the realm of quantum mechanics is a bit like going through the looking glass  objects pop in and out of existence, things over here can affect others over there, and all of this can happen instantaneously without anything crossing the space between the objects! How can this occur when the rules of the quantum world conflict so dramatically with the everyday rules of the visible world? Its a question that was battled out by the greatest minds of a generation  which included Einstein and Niels Bohr. NOVA explores how their counterintuitive conclusions have created one of the most successful theories in the history of science and launched the technological advances  like cell phones and computers  that are part of our everyday lives.
TUNE IN:
AETN Exploration Wednesdays
Nature  Bears of the Last Frontier: Artic Wanderers, 7 p.m.
NOVA  The Fabric of the Cosmos: Quantum Leap, 8 p.m.