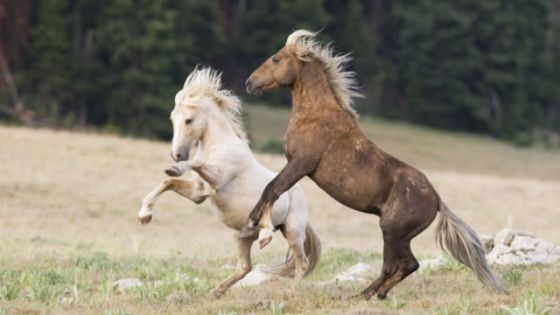 Tonight on AETN Exploration Wednesdays, continue the sagas with Nature  Cloud: Challenge of the Stallions at 7 p.m. and NOVA: Hunting the Edge of Space  The Ever Expanding Universe at 8 p.m.

On Nature, the returning saga of Cloud, the wild, white stallion finds us back in the Arrowhead Mountains of Montana. Cloud is now a confident band stallion in his prime. As he rules the mountains, gathering mares and expanding his reign, the story turns to his two sons. Bolder is his by birth  beautiful and golden, the success of his father and grandfather flowing in his veins. Flint, sired by another stallion, is the colt Cloud raised. Now, Bolder has gathered some mares of his own while Flint has joined a group of bachelor stallions, young guns roaming the mountains. Who will rise to challenge the mighty Cloud? Nature  Cloud: Challenge of the Stallions reveals whether nature or nurture will produce the next great stallion of the Arrowheads.
At 8 p.m., NOVA continues its study of our ever-expanding universe. From the discovery that the Milky Way is just one galaxy among billions to the stunning revelation that these galaxies are speeding away from each other faster every second, this episode investigates the universe's distant past  and its future. Modern telescopes have added a mysterious new twist to the plot: the vast majority of the stuff of the universe is invisible, tied up in dark matter and dark energy. But what are these mysterious dark forces? A new generation of telescopes is embarking on a mission impossible to see the unseeable and answer one of the greatest unsolved mysteries of the cosmos in NOVA: Hunting The Edge of Space - The Ever Expanding Universe.
TUNE IN:
AETN Exploration Wednesday, June 27, 2012
Nature  Cloud: Challenge of the Stallions, 7 p.m.
NOVA: Hunting the Edge of Space  Our Ever Expanding Universe, 8 p.m.