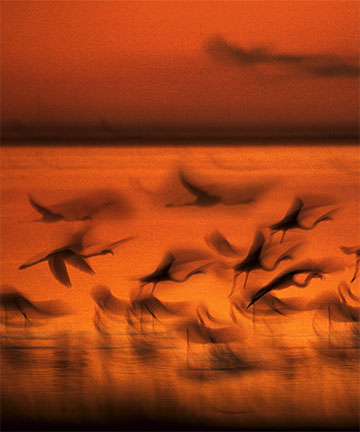 This AETN Exploration Wednesday, its a wild ride into natural extremes with Nature  Kalahari: The Great Thirstland at 7 p.m. and NOVA: Rat Attack at 8 p.m.

Located in Southern Africa, the Kalahari Desert is a world of extremes. "Nature" invites you to watch as a land that is generally marked by apparent emptiness, is periodically awakened by explosions of life. View as the relentless cycles of dry and wet, scarcity and plenty, dictate which creatures can live here and which will not survive.

In tonights episode, well journey to the great desert after long spells of sparse rain have left the riverbeds dry and the wildlife with little to eat. Then, as if by magic, swarms and multitudes of insects and birds come to life, great herds of wildebeest and zebra gather, flamingoes come home to breed and fill the skies, and bullfrogs arise from years of sleep, all because the great rains have finally returned.

Following the desert drama of the Kalahari, NOVA takes us to India for an exciting  if slightly horrifying  view of a unique phenomenon. Once every 48 years, bamboo forests in parts of northeast India go into exuberant bloom. Then, like clockwork, the flowering is always followed by a plague of black rats that appear to spring from nowhere!

Following the rats' sudden eruption, destruction and famine devastate the villages in their wake. Captured for the first time on film, NOVA and National Geographic document this rodent population explosion in vivid detail. Youll also explore how scientists are unraveling the connections between the bamboo flowering and rat outbreaks. Ultimately, the scientists' research aims to help local people cope with the next attack  due in 2056.