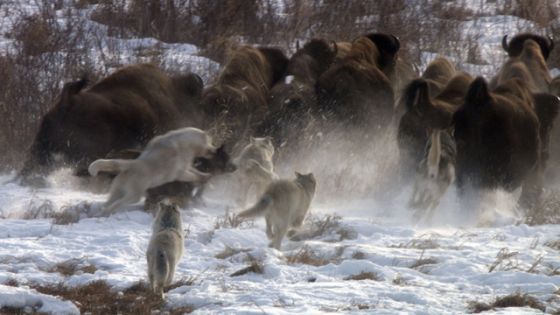 This AETN Exploration Wednesday, travel from ancient times to space with "Nature" and "NOVA." We'll learn how descendants of the ancient buffalo and wolves continue an epic life-and-death drama in the frozen North in "Cold Warriors" at 7 p.m. Next, watch as data from earth-observing satellites is transformed into dazzling visual sequences, each one exposing the intricate web of forces that sustains life on earth, on a new special, "Earth From Space," at 8 p.m.

For thousands of years, wolves hunted buffalo across the vast North American plains … until the westward settlement of the continent caused their virtual extinction of the vast herds and their eternal predators. However, the ancient relationship is not altogether lost. In just one location, it continues uninterrupted - in Wood Buffalo National Park. There, the descendants of the ancient buffalo and wolves still engage in their epic battle. Watch it unfold in "Nature: Cold Warriors," at 7 p.m.
Explore "Earth From Space" in a special new episode of "NOVA" at 8 p.m. and learn how the intricate web of life-sustaining forces affects us all. Data from earth-observing satellites is transformed into dazzling visual sequences, and each impressive sequence exposes an intricate and amazing series of events. We'll learn how dust blown from the Sahara fertilizes the Amazon, how a vast submarine "waterfall" off of Antarctica helps drive ocean currents around the world and how the sun's heating of the southern Atlantic can create a colossally powerful hurricane. From the microscopic world of water molecules to a magnetic field that's bigger than earth itself, this episode of "NOVA" will reveal the astonishing beauty and complexity of our dynamic planet at 8 p.m.
TUNE IN: